Torsus; Borg drone;
Security officer;
Voyager officer
Mary Thompson is an actress who appeared as a background actress in several episodes of Star Trek: The Next Generation and Star Trek: Voyager. As a background actress she received no credit for her appearances and was identified by the call sheets of the episode "Descent", dated Thursday 22 April 1993, and a makeup continuity Polaroid of her. On the latter one she was named Mary Thomson. Her Starfleet uniform was later sold off on the web. [1] 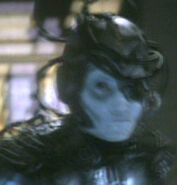 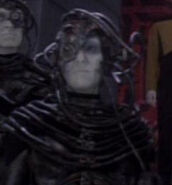 Voyager officer
VOY: "The 37's"
(uncredited)
Add an image to this gallery

Retrieved from "https://memory-alpha.fandom.com/wiki/Mary_Thompson?oldid=2612393"
Community content is available under CC-BY-NC unless otherwise noted.