Memory Alpha
Register
Don't have an account?
Sign In
Advertisement
in: Performers, DIS performers, After Trek guests,
and 2 more
English

She reprised her role in the Star Trek: Short Treks episode "Runaway", and also appeared as her character's mirror universe counterpart in "Despite Yourself". Wiseman also voiced the character as part of the Discovery-themed Star Trek Online expansion, Age of Discovery.

After growing up in Milford, Pennsylvania and Gaithersburg, Maryland, she became interested in acting through the high school outreach program of the Washington D.C. Shakespeare Theatre. She earned a BFA in Theatre Arts at Boston University, before attending the Juilliard School's Drama Division, where she met her future husband Noah Averbach-Katz, who later guest starred in the Discovery episode "Scavengers". They were also in the same class as fellow Discovery actress Mary Chieffo and graduated in 2015. Wiseman's nickname at Juilliard was "Brassy Broad". [1] Wiseman and Averbach-Katz married in February 2019.

She also appeared in the 2014 short Three Dates and is currently filming another short, Health to the King. 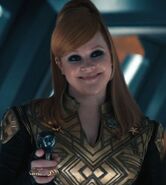