Start a Wiki
Multiple realities
(covers information from several alternate timelines)
This article or section is incomplete This page is marked as lacking essential detail, and needs attention. Information regarding expansion requirements may be found on the article's talk page. Feel free to edit this page to assist with this expansion.

For the TNG episode, see "Masks".

A mask was an object worn over the face and used for entertainment, cultural, or religious reasons. Masks could also be worn to hide the true identity of a person.

The shopkeeper Garos had a variety of masks in his curio shop on the Akaali homeworld including one of the mythical ruler Draylan. (ENT: "Civilization")

The Malurians disguised themselves while on a covert mining operation on the Akaali homeworld. They wore thin masks covering their true identity. During a fight with one of the Malurians, Jonathan Archer damaged this mask and unconvered the true form. (ENT: "Civilization")

A fictional scenario designed to test Cadet Thira Sidhu included Captain Christopher Pike wearing an automatically detaching mask, supposedly so the crew would not see that he had mutinied. (ST: "Ask Not")

In an alternate timeline, Jake Sisko kept this mask at his house in New Orleans. (DS9: "The Visitor")

The Romulan Tal Shiar was alledged to merely be a mask for a much older cabal called the Zhat Vash. (PIC: "Maps and Legends") 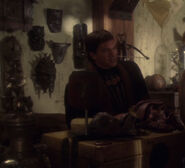 A collection of Akaali masks

Masked hosts at a Luau
Add an image to this gallery

Retrieved from "https://memory-alpha.fandom.com/wiki/Mask?oldid=2524454"
Community content is available under CC-BY-NC unless otherwise noted.