A master systems display (abbreviated MSD), also known as the master situation monitor, or master situational display, was a large, wall-mounted computer display on Federation starships and space stations, sometimes in engineering or the bridge. The display usually featured a large cutaway diagram of the vessel, and was used to provide a detailed overview of the ship's operational status. 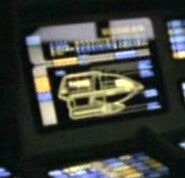 Originally, Scenic Art Supervisor Michael Okuda intended the "master systems display" and the "master situation monitor" to be two different objects altogether. According to the Star Trek: The Next Generation Technical Manual (pp. 47-48) and the Star Trek Encyclopedia (4th ed., vol. 2, p. 25), the "master systems display" was the information console (affectionately dubbed the "pool table") seen in main engineering on board the USS Enterprise-D, USS Enterprise-E, and in the back of the bridge on the Enterprise NX-01. The "master situation monitor" was meant to refer to the wall-mounted back-lit (cut-away) graphics of the ships in question. Neither of the two designations were initially seen on-screen in their entirety, though there were "master situation" bridge work stations on both the USS Excelsior and USS Enterprise-A in Star Trek VI: The Undiscovered Country (and, in Excelsior's case, in the Star Trek: Voyager episode "Flashback" as well).

None of the wall-mounted graphics ever had a caption "master systems display" until Scenic Artist Doug Drexler updated the cut-away graphic for the Defiant-class. Drexler gave it the caption "master systems display", which is legible in the Star Trek: Deep Space Nine episodes "Shattered Mirror" and "One Little Ship". This was the first such graphic ever to actually carry the exact designation, as every other MSD, featured in the live-action franchise up till then, was usually labeled with the ship's name, registry, ship class, random numbering, or any combination thereof. Drexler created additional LCARS graphics endowed with the caption for display on the other Defiant sets, specifically the engineering set, several of these turning up in the 2006-2008 wave of Star Trek auctions, such as Lot 3659 in the It's A Wrap! sale and auction of June 2007.

The first MSD was created for the sets of the Enterprise-D by Michael Okuda. According to the Encyclopedia (3rd ed., p. 291), it included a number of in-jokes, including "the official USS Enterprise duck, the ship's mouse, a Porsche, a DC-3 airplane, the Nomad space probe, and the hamster on a treadmill that was alleged to be the true source of power for the ship's warp engines."

The MSD terminology, regardless of its original intent, was specifically introduced in The Next Generation, though operations graphics displaying similar properties, had been featured in prior Star Trek incarnations, including Star Trek: The Original Series, though up until that point in time they were not endowed with a designation. The earliest and best known such graphic was the Matt Jefferies-created large rudimentary graphic situated on the bulkhead right next to the turbolift doors on the bridge (on the left when entering the lift from the bridge) of the original Constitution-class USS Enterprise. Doug Drexler later created a detailed operation schematics graphic, still unnamed, of the Constitution-class USS Defiant and was seen in "In a Mirror, Darkly, Part II".