William Windom
"The commander is responsible for the lives of his crew, and for their deaths. Well, I should have died with mine."
– Matthew Decker to James T. Kirk, 2267 ("The Doomsday Machine")

Commodore Matthew "Matt" Decker was a Human Starfleet flag officer assigned as the commander of the USS Constellation.

By 2256, Decker was one of Starfleet's most decorated captains, ranked among other legends such as Robert April, Christopher Pike, Philippa Georgiou, and Jonathan Archer. (DIS: "Choose Your Pain")

In 2267, the Constellation was on a routine survey mission near system L-374 when it encountered an alien planet killer systematically destroying the planets of the system. During the encounter, Decker's ship became hopelessly damaged, rendering all power plants dead. Decker remained on board to confront the machine, beaming his entire crew to what he believed was safety on L-374 III, the third planet of the L-374 system. When the alien machine destroyed that planet, and further damaged the Constellation, Decker was the only survivor.

Decker was later discovered by the USS Enterprise, which transported him aboard from his broken ship. He initially resisted the effort to do so, stating that he had never lost a command before. Consumed with grief over his actions, and with an almost reckless desire for revenge, Decker seized command of the Enterprise after losing contact with the Constellation, leaving Captain Kirk stranded aboard the Constellation.

Decker then launched an attack on the planet killer in an attempt to stop it from reaching "the most densely populated sector of our galaxy." His attack turned out to be a futile move which resulted in severe damage to the Enterprise. When communications were restored with the Constellation, Captain Kirk gave Commander Spock a direct order to relieve Decker, on Kirk's personal authority, as captain of the Enterprise. Decker submitted to Spock's relieving him of command after being threatened with arrest if he did not comply. Decker subsequently stole the Enterprise shuttlecraft Einstein, piloting it into the maw of the machine, in a suicide attack.

Decker was killed in the attempt. While the attack failed to cause significant damage – the planet killer had lost a small amount of power – it did demonstrate to the Enterprise crew how to disable the machine. Kirk drove the Constellation into the maw of the planet killer, which died when it was unable to handle the energy released by the Constellation's exploding impulse engines. Following the battle, Captain Kirk noted in his log that Decker had given his life in the line of duty. (TOS: "The Doomsday Machine") 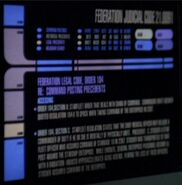 Decker's name on an LCARS display

The character of Matthew Decker was devised by writer Norman Spinrad. The producers of Star Trek: The Original Series initially asked him to write a part for Robert Ryan. Intending to take inspiration for the plot of "The Doomsday Machine" from the story of Moby Dick, Spinrad developed the role as being similar to Captain Ahab. The character was intentionally made less intense after William Windom was instead cast as Matt Decker. Stated Spinrad, "Things had to be adjusted. I had to make him a little softer, and I think it might have taken some of the edge off of the story. In the original version, Commodore Decker was much stronger. They don't find him slumped over in the ruined ship. Instead, they find him staring out the viewscreen and in a very bad mood. There was also the feeling that a guest star with that kind of presence would overshadow Captain Kirk, and therefore his character had to be toned down and his lines reduced." (Captains' Logs: The Unauthorized Complete Trek Voyages, p. 48)

In the second revised final draft script of "The Doomsday Machine", this character was called "Curt Decker" in the cast list, and "Matt Decker" in the rest of the script.

In an excerpt from the writer's guide to Star Trek: The Motion Picture featured in The Making of Star Trek: The Motion Picture – Susan Sackett and Gene Roddenberry's book about the movie – Matt Decker is established as the father of Will Decker. Similarly, for the entry about Williard Decker (Will Decker) in the Star Trek Encyclopedia (4th ed., vol. 1, p. 191), he is identified as the son of Matt Decker. In a background note for this entry, the authors state that Paramount publicity materials for the first movie suggested the existence of this relationship.

In the novel Vendetta – essentially a "sequel" to both "The Doomsday Machine" and the Star Trek: The Next Generation episode "The Best of Both Worlds" – it is revealed that Jean-Luc Picard was assigned to research Matt Decker's career while he was at Starfleet Academy, with the limited available details of the conflict with the planet killer causing Picard to assume that Decker took the Constellation into the planet killer himself, rather than his failed attempt to attack it with a shuttlecraft.

In James Blish's adaptation of "The Doomsday Machine", Decker's first name is "Brand" and, in common with the episode's majority of earlier script drafts, he doesn't pilot the shuttlecraft into the planet killer. In addition, after Decker orders McCoy off the bridge with the statement, "Mr. Spock knows his duties under regulations, doctor... do you?" Blish gives McCoy one final retort: "Yes, sir – go to sickbay and wait for the casualties you're about to send me."

Several other members of the Decker family are featured in the Starfleet Academy comic book series.

In the book Star Trek: Federation - The First 150 Years by David A. Goodman, the eighty-year-old Marshall-class ship USS Patton was taken out of mothballs, refitted and re-armed, and placed under the command of then-Lieutenant Commander Matthew Decker as a part of a Starfleet scout mission protecting the Asteroid Prospectors Association (APA) in the Disputed Area near Klingon space. On the fifth planet of the Donatu star system within the Disputed Area, the APA discovered a rich deposit of dilithium in 2242, and a prospecting station was set up. This drew the attention of three Klingon ships under the command of Captain Klaar, who was bent on removing the Federation presence on Donatu V. Outgunned, Decker, aboard the Patton, and Commodore (later Admiral) José I. Mendez, commanding the USS Eisenhower, dove their ships in and out of Donatu V's heavily clouded atmosphere at warp speeds, firing multiple volleys at the unsuspecting Klingons. This brilliant attack bought just enough time for two Baton Rouge-class ships to arrive and help chase the Klingons away, and was the decisive action which convinced the Federation Council to commission a fleet of twelve Constitution-class starships, conceived and proposed by Robert April.

Decker's first meeting with Kirk is detailed in The Brave and the Bold, Book One, as the Enterprise and Constellation join forces to combat a deadly plague.

Decker's mirror universe counterpart (β) appears in The Sorrows of Empire, succeeding the mirror Garth of Izar as Grand Admiral of the Imperial Starfleet, with the ISS Constellation (which survives long enough to be refitted, like the Enterprise) as his flagship. He is killed in a mutiny instigated by Spock in 2277.

The alternate reality version of Matt Decker appears in the comic crossover mini-series Star Trek - Green Lantern: The Spectrum War, though his last name is spelled "Dekker." In 2262, he has the Constellation surveying the border of the Alpha and Delta Quadrants when it was suddenly attacked and destroyed, killing Dekker and the entire crew by the Gorn Glocon, who was chosen by a Red Lantern Power Ring that had crossed over from another universe to be its bearer and started being trained in the use of its power by Atrocitus, leader of the Red Lantern Corps who came from the same universe as the ring, with Glocon's attack on the Constellation as a declaration of war between the Federation and the Gorn Hegemony.

Retrieved from "https://memory-alpha.fandom.com/wiki/Matt_Decker?oldid=2475450"
Community content is available under CC-BY-NC unless otherwise noted.