In 2009, she was interviewed for the special feature "Westmore's Legacy" on the Star Trek: The Next Generation Motion Picture Collection (DVD) edition of Star Trek: Insurrection. She mentioned that she worked as a camera test model and a make-up test model for the Ba'ku and that she also portrayed a Ba'ku with one line of dialogue which ended up on the floor of the cutting room. Michael Westmore proudly enthused, "I liked watching McKenzie work on the show." (Star Trek Monthly issue 110, p. 37)

Westmore's acting debut was at the age of two, in the 1980 film Raging Bull, where she portrayed the daughter of Robert De Niro's character, Jake LaMotta. Her appearance in the film was at De Niro's request, after the two built a relationship on the film's set, as her father served as film's make-up creator. (Makeup Man: From Rocky to Star Trek, p. 127)

Later in her career, she starred as Sheridan Crane on the soap opera Passions in 2008. More recently she co-starred in the soap opera All My Children in 2009, as psychiatrist Dr. Sinclair.

From 2011 to 2018 she was the host of the Syfy series Face Off, a prosthetic makeup artist competition, that featured such Trek alumni in various capacities, including her father, Michael Westmore, Glenn Hetrick, Ve Neill, Neville Page, and Doug Jones. 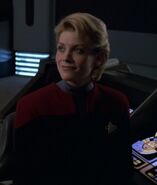