Megan Cole is the actress who portrayed the J'naii Noor in the Star Trek: The Next Generation fifth season episode "The Outcast". She filmed her scenes for this episode on Monday 13 January 1992 on Paramount Stage 16. Her costume from this episode was sold off on the It's A Wrap! sale and auction on eBay. [1] Cole later appeared as Senator Kimara Cretak in the Star Trek: Deep Space Nine seventh season episodes "Image in the Sand" and "Shadows and Symbols". 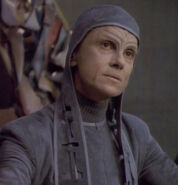 Kimara Cretak
DS9: "Image in the Sand", "Shadows and Symbols"
Add an image to this gallery

Retrieved from "https://memory-alpha.fandom.com/wiki/Megan_Cole?oldid=2417212"
Community content is available under CC-BY-NC unless otherwise noted.