Megan Gallagher (born 6 February 1960; age 62) from Reading, Pennsylvania is an American actress who guest-starred in Star Trek: Deep Space Nine and Star Trek: Voyager. She is married to Jeff Yagher, who played Iden in the Voyager seventh season episode "Flesh and Blood". The couple have two children together. She is also the sister-in-law of Catherine Hicks. Her undershirt from "Body and Soul" was sold off on the It's A Wrap! sale and auction on eBay. [1]

Gallagher did not appear in another film until 1991's ...And Then She was Gone (with Brett Cullen and Dakin Matthews). In 1995, Gallagher reunited with Nicolas Surovy in the Breaking Free (with Gina Philips). Gallagher then appeared in her first short film, the independently-produced Ripple (with Paul S. Eckstein, Ed Lauter, Colm Meaney, and Robert Picardo). Gallagher then worked with Daniel Roebuck in Abducted: A Father's Love (1996); also that year was Crosscut (with George Murdock). This concluded Gallagher's film work in the 20th century.

1984 served as Gallagher's television debut as well. Thus was the case when Gallagher guest-starred on Buffalo Bill in "The Girl on the Jetty" (with Joanna Cassidy and John Fiedler). Gallagher served among the original guest stars on the premiere episode of the legal drama L.A. Law (starring Corbin Bernsen, and with Patrick Cronin, John Hancock, Jerry Hardin, Robert Knepper, Mark La Mura, James B. Sikking, and Alfre Woodard). The L.A. Law connection served Gallagher well again in 1993. David E. Kelley served as a writer on that series and in 1993, created another legal series, Picket Fences (with Kelly Connell, Justin Shenkarow, and Ray Walston). From 1996 to 1998 she played Catherine Black on Millennium. Gallagher appeared in the first season episode "Dairy Queen" (with Cristine Rose and Leigh Taylor-Young). That same year, Gallagher went to comedy on Empty Nest in "Read All About It" (with Robert Costanzo and Kimberly Cullum). Gallagher returned to court TV when she guested on Family Law (starring TNG guest performers Christopher McDonald and Julie Warner) in "All in the Family" (2001, with Erich Anderson). A year later, Gallagher got guest work on the Jerry Bruckheimer-produced FBI drama Without A Trace (starring Enrique Murciano) in the episode "Birthday Boy" (with Jeff Ricketts). Gallagher returned to working with Roger Aaron Brown on Brown's own police series The District in "Sacrifices" (2003, with Michael Nouri). Gallagher went retro with her next guest role on the 1960s period drama American Dreams (starring Virginia Madsen) in "It's My Life" (2005, with Kevin McCorkle and James Read). Gallagher reunited with Rene Auberjonois and also worked with William Shatner on their legal series Boston Legal in "Helping Hands" (2006, with Joanna Cassidy and Kelly Connell). 2007 saw Gallagher guesting on the forensic procedural Crossing Jordan (starring Miguel Ferrer) in "Sleeping Beauty" (with Susan Gibney). Gallagher's last single guest role was on the police drama The Mentalist in the Christmas-themed "Jolly Red Elf" (2010, with Gregory Itzin). 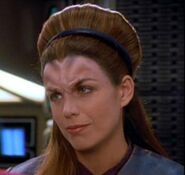 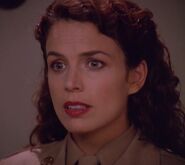 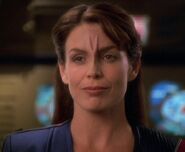