Mego Toys (pronounced MEE-go) is popularly known as a major American toy manufacturer and the producer of many licensed action figures during the 1970s and early 1980s.

Under the auspices of Abrams, Mego successfully branched out into pop culture and produced the World's Greatest Super Heroes line of licensed DC and Marvel comic figures, beginning in 1972. TV- and film-based toy lines including Space: 1999, Planet of the Apes, and Wizard of Oz were soon added and also became top sellers.

Having successfully turned the initially small family business into a multi-million dollar toy company, Marty Abrams is considered to be "the father of the modern action figure" by a number of toy experts. (The Toys That Made Us)

Abrams regained control of the Mego trademark in 2009, following earlier unsuccessful attempts. Mego Corporation was reformed in 2018, is currently headquartered in Great Neck, New York, and is a partnership between Abrams and Joel Rosenzweig. [2]

After Star Trek: The Animated Series had premiered in 1973, CEO Abrams was approached by his key employee, Neal Cublin, who suggested adding Star Trek: The Original Series to the company's toy lines, having noted that the show had made a spectacular comeback through syndication. Cublin had also observed that there were virtually no real Star Trek toys on the market at the time to cater to the needs of the growing fan base. Abrams sent Cublin to the Paramount Publicity Department to find out if a license could be acquired, and was pleasantly surprised when Cublin returned with a contract costing the company only US$5,000. (The Toys That Made Us)

By 1975, the company began to produce a line of Star Trek action figures, play sets, and other toys based on Star Trek: The Original Series, which, as hoped, had became hugely successful. These were the first action figures ever produced for the franchise, with a considerable level of accuracy for their time.

In the end, the US$5,000 Star Trek toy license grossed the company US$50 million, much to the glee of Abrams. "You can imagine the joy we had on that one!", he stated years later. (The Toys That Made Us) This had been a prime example of how the franchisor currently viewed its property, treating "(…)the whole idea of Star Trek licensing and merchandising with immense disdain", as author Stephen Edward Poe opined. (A Vision of the Future - Star Trek: Voyager, pp. 45-46)

In 1976-1977, Abrams declined to bid for the license to manufacture Star Wars toys, purportedly feeling that his company should continue to focus on television-based properties. Like most Hollywood movie studios, Abrams had vastly underestimated the impact and longevity of the first Star Wars film and the overwhelming success of both the movie itself and its resultant toy lines.

Kenner Toys acquired the Star Wars toy license and began to release these products over the course of 1978, resulting in phenomenal sales and a profound effect on Mego. Mego dropped from a 75% male market share to 30% almost overnight, with its turnover likewise dropping from US$150 million to $50 million, leaving the company in dire financial straits. Stated Abrams, "Star Wars put a dagger in the heart. We just couldn't figure a way how to pull the dagger out and heal ourselves up fast enough." (The Toys That Made Us)

Two years later, Mego pinned its hopes on the success of Star Trek: The Motion Picture, itself a direct result of Star Wars' incredible profitability, and the company began to produce new, movie-based 3¾-inch action figures, 8-inch starships, and assorted related toys in 1980.

Lamentably, the movie was generally received as a disappointment and hoped-for Star Wars-like toy sales did not materialize. Already in financial trouble, Mego declared bankruptcy in 1982 and finally closed its doors in 1983, amidst tremendous legal turmoil, finally resulting in Abrams' conviction and incarceration for several counts of fraud and obstruction of justice. (The Toys That Made Us)

A number of Mego items were sold in Canada by Grand Toys and bore both its brand and Mego's. British toy company Palitoy was the exclusive UK distributor of Mego's Star Trek products.

In 2018, the history and development of Mego's Star Trek lines was featured in the "Star Trek" episode of the Netflix series, The Toys That Made Us.

In July 2018, the Mego brand was reintroduced (by the newly-reconstituted Mego Corporation) for a new line of toys, including updated versions of its classic Star Trek figures. Alongside new figures from the films and Star Trek: The Next Generation, TOS versions of Hikaru Sulu and Pavel Chekov figures were introduced to the series for the first time, having been omitted during the 1970s.

Debuting in 1975 and the first Star Trek action figures ever produced, figures stood eight inches tall, were fully articulated, and included cloth uniforms (or costumes) and miniature accessories. Most were reasonable likenesses of the show's characters while others were clearly "rush jobs" or re-uses of figures from earlier, unrelated Mego toy lines.

In total, fourteen figures in three "waves" were eventually released by Mego between 1975 and 1978. Collectors note that the second and third "Aliens" waves are the hardest to find, and the Romulan and Andorian from Wave Three are commonly considered to be the rarest figures of the series.

This wave originally consisted of these five figures:

Later, as part of the same set, Mego added:

38 years after the action figure was released, a Neptunian finally made an appearance in a Star Trek story, in Star Trek: The Next Generation - Mirror Broken, Issue 4.

NOTE: The Wave Two figures were also re-released as part of Wave Three.

In addition, several playsets and accessories were produced for the figures:

NOTE: Palitoy also marketed the Transporter unit from the Action Playset as a single-piece boxed accessory (Item No. 22803). It also sold a modified version of it as a TARDIS for its Doctor Who figures.

In 2008, Diamond Select Toys reissued near identical (save for the company logo imprint on the packaging) replicas of the Wave One figures and the U.S.S. Enterprise Action Gift Set (UPC 699788177709) as their "Cloth Retro Series 1" line. [5]

Sold in both a boxed set and a carded "blister pack", this was a pair of walkie-talkies styled after the communicators seen on the original Star Trek. They were molded primarily from blue plastic, with a button-release "cover" that flipped up like the antenna grid on the original prop.

Marketed to be compatible with the above communicators, this was a large unit made to resemble the communications console on the Enterprise bridge.

This was a "role playing" toy that consisted of a light-emitting "Super" type 2 phaser (an enlarged, bulkier version of the standard type 2 phaser) with a "sonic buzzer device" that fired at a "target reflector badge" depicting a Klingon D7 class cruiser. Firing at the badge's large red target reflected the light back to the phaser, activating a buzzer.

NOTE: An upgraded version of the same technology would be used for the Star Trek: The Motion Picture-inspired Star Trek Phaser Guns by Milton Bradley.

This was an actual, functioning portable tape recorder made to look like a tricorder prop from the show. Like the communicators, this was molded primarily from blue plastic. It had a flip-up top that concealed the dial that controlled most of the recorder's functions, as well as the volume control. The tape compartment was located directly below. The unit came with a cassette tape containing 30 minutes of audio from "The Menagerie, Part I" and "The Menagerie, Part II". The other side of the tape was blank, allowing the user to create their own audio recordings.

This was a fully-functional large desk calculator with LED readout and a light-up panel depicting artwork of Kirk, Spock, and Uhura.

Similar to the "Telescreen Console" marketed with Mego's original Star Trek action figures, this was a tabletop game unit that allowed the player to attack alien ships. Gameplay was a little more complex than on the Telescreen, as there were more controls (especially dual buttons for port and starboard shields) to use, as well as a larger playing screen and a "digital-style" scoreboard.

Mego marketed a line of educational Trek-related toys which included an Intergalactic Projector (a home planetarium projector), a Crystal Radio set, and other "build-it-yourself" scientific toys.

The company advertised a tribble toy, but it is doubtful that it ever reached production.

In 1980, Mego released three starship miniatures that appeared in Star Trek: The Motion Picture, though distribution was widespread only in Canada. The USS Enterprise refit only saw a wide release in Canada and also bore a Grand Toys logo on its box, like the other Canadian TMP releases. The series was also retailed by Airfix under its own brand in Germany, and the Mego logo was not printed onto the packaging. The ships measured about eight inches long and included stickers and a stand. 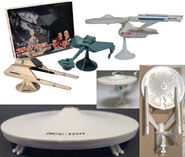 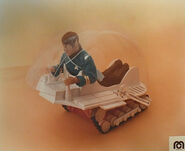 In the Star Trek parody and pop culture-referencing television sitcom The Big Bang Theory, Mego Star Trek action figures have made appearances on a few occasions. This comedy series is centered on four science nerds who are rabid fans and collectors of Star Trek, science fiction, and comics memorabilia.

Mego toys appeared prominently in the fifth season "The Transporter Malfunction" episode in which central character Sheldon Cooper and his roommate were given a rare, mint-in-box (a condition highly valued in toy collector circles) Palitoy "Star Trek Transporter Room Playset" as a gift by their attractive female neighbor. This toy is a variant of Mego's "USS Enterprise Action Playset" and was seen as a generous gift indeed as this UK-exclusive version is considered to be exceptionally rare. [6]

Sheldon initially refused to play with it to avoid diminishing its perceived value but he quickly yielded to temptation, goaded on by his Mego Spock action figure which had started to "speak" to him. Spock's voice was performed by Leonard Nimoy. Sheldon accidentally broke the toy then surreptitiously replaced it with his roommate's. Later, in his fevered, guilt-ridden imagination, Nimoy's "Mego Spock" chastised him for his dastardly deed and subsequent refusal to own up to it. His initial resistance caused Sheldon to be attacked by a Gorn in a nightmare and he finally confessed his guilt to his roommate.

The reference itself became featured in the "Star Trek" episode of The Toys That Made Us.

The U.S.S. Enterprise Action Playset (or Gift Set) could be seen in its closed vinyl container in the tenth season episode "The Property Division Collision".

The items used in the episode were taken from the CBS Consumer Products archive. CBS is not only the broadcaster of The Big Bang Theory but is also the owner of the Star Trek television franchise.