Navia, a Colombian-American New York state native, has appeared in several short films and television projects since 2011. She can be seen in episodes of Billions, Homeland (with Maury Sterling), and New Amsterdam (with Daniel Dae Kim, Maury Ginsberg, and Raphael Sbarge).

In 2013, she co-starred in the independent science fiction film The Paragon Cortex, for which she won Best Actress award at the Wild Rose Independent Film Festival.

She is also a comedian and performs a one-person stage comedy show titled The Girl with Short Hair.

She had said her former partner Brian, who passed away in 2021 "is 100% the reason that I booked Star Trek – he is the example of the kind of person and partner that a working actor like myself, a struggling actor at times, needs in their life. He absolutely believed always that the right role would come along." [1] 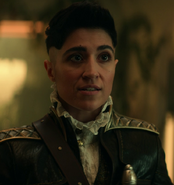