A menu was a readable listing of available selections for customers in bars, cafes and restaurants, as well as computer users.

Captain Jonathan Archer asked T'Pol for some good Vulcan menu suggestions to "break the ice" with Vulcan Captain Vanik at dinner aboard Enterprise NX-01 in 2151. (ENT: "Breaking the Ice")

The Shipyard Bar featured a menu with a hamburger and various beverages on its cover. (Star Trek)

The mess hall aboard USS Discovery in 2256 included a menu display for Earth, showing choices for breakfast, lunch, and dinner, as well as miscellaneous items. (DIS: "Lethe")

The waiter Edouard kept a glass menu when presenting Captain Jean-Luc Picard a table at the holographic recreation of the Café des Artistes. (TNG: "We'll Always Have Paris")

In 2399, Caler browsed the menu of Dahj Asha's replicator, which he humorously called "tragic", as one of the items listed was a vanilla-flavored beverage. (PIC: "Remembrance") 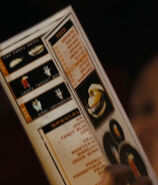 The menu of the Shipyard bar

The menu of the Café des Artistes 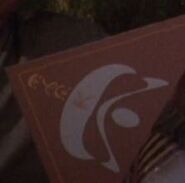 A menu at a Risan restaurant

Though not readable in the episode, the Café des Artistes menu was reproduced in the reference book Star Trek: The Next Generation - The Continuing Mission on page 67.

Retrieved from "https://memory-alpha.fandom.com/wiki/Menu?oldid=2501967"
Community content is available under CC-BY-NC unless otherwise noted.