Michael Bofshever (born 12 October 1950; age 71) is an actor who appeared in three Star Trek productions. His role as engineer of the Excelsior in Star Trek VI: The Undiscovered Country was cut from the final aired version, although his name remained in the end credits. He filmed this scene, scene 9, placed in the engine room of the Excelsior on Paramount Stage 9 on 12 June 1991. His costume from the episode "Progress" was sold off on the It's A Wrap! sale and auction on eBay and also worn by background actor Alan Schwartz. [1] 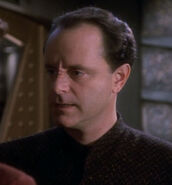 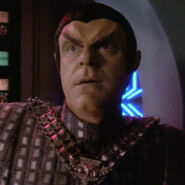