Michael "Mike" Anthony Muñoz (born 28 August) is a stuntman, actor, and stunt coordinator who appeared in several Star Trek productions. He worked as stunt actor, background actor, and stand-in on at least three series and one film. His brothers Mario Muñoz and Mark Muñoz, his mother Nancy Muñoz, and his wife Marisa Muñoz also worked on various Trek projects. Muñoz has been married since 1983. The couple has two children.

For the Star Trek: Voyager fifth season episode "The Fight", Muñoz filmed his scenes on Thursday 22 October 1998 with a makeup call at 5:30 am on Paramount Stage 16 and is listed as "Alien Corner Man" on the call sheet.

Muñoz grew up in Santa Monica, California and joined his brothers for several sport activities on the beach as well as dancing. In the '70s, he started to portray Disney characters in parades and stage plays, such as Mowgli, Mickey Mouse, and Pinocchio. Continuing his skills in different sport activities, including skateboarding, rock climbing, surfing, and motorcycle riding, Muñoz also started to study stunts and acting.

Today, he is one of the stuntmen who work as stunt double for child actors and has also doubled Danny Woodburn and Danny DeVito.

Muñoz career started in the late '70s with an appearance in The Gong Show (1978) as a tap dancing gorilla, a creature suit performance. In the following years he had guest roles and stunt acting parts in television series such as America's Most Wanted (1992), The Nanny (1995, starring Daniel Davis), Baywatch, Home Improvement (1996), Charmed, and Angel. He also portrayed the PACMAN in several photo shootings, print-ads, and talk shows such as Fox and Friends (1999), Donny and Marie (2000), and Today (2000).

Between 2006 and 2007, Muñoz and his wife Marisa worked as producers for the talk show Good Morning Hawai'i, hosted by Branscombe Richmond. He doubled Danny DeVito in the comedies The Oh in Ohio (2006) and Deck the Halls (2006, under stunt coordination of Charlie Croughwell), and performed stunts in the television series Saving Grace (2007, with Leon Rippy and Mark L. Taylor), American Body Shop (2007, with Richard Riehle), and Nip/Tuck.

More recently, he doubled again for Danny DeVito in the television series It's Always Sunny in Philadelphia (2008, alongside Mark Aaron Wagner) and the comedy House Broken (2008, with Michael Bofshever and stunt coordinator Bobby C. King), portrayed Tango in the fantasy comedy Elf Academy (2008, with Diane Salinger), and performed stunts in the family movie Opposite Day (2009, along his brothers under stunt coordinator Cole McKay).

In 2010 he doubled again the stunts for actor Danny DeVito in the comedy When in Rome. Kimberly Shannon Murphy and Peter Epstein also performed stunts in this film. 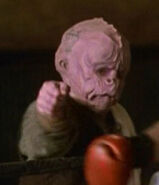 Alien corner man
VOY: "The Fight"
(uncredited)
Add an image to this gallery

Retrieved from "https://memory-alpha.fandom.com/wiki/Michael_Mu%C3%B1oz?oldid=2415657"
Community content is available under CC-BY-NC unless otherwise noted.