Goval; Hogue; Koss
Michael Reilly Burke (born 30 November 1969; age 52) is an actor who had guest roles in episodes of Star Trek: The Next Generation and Star Trek: Deep Space Nine, and a recurring role in three episodes of Star Trek: Enterprise. Parts of his costume from "Descent, Part II" were sold off on the It's A Wrap! sale and auction on eBay and were also worn by Tom Morga, Gary Hunter, and John de Lancie. [1]

He had recurring roles on several television series, including Beverly Hills, 90210, Providence (with Concetta Tomei), The Beast (with Frank Langella), and NYPD Blue (with Gordon Clapp). He also appeared in the science fiction comedy Mars Attacks!, which featured Paul Winfield, and in 2002, he starred in the title role of the biographical thriller Ted Bundy.

He was cast as Rex Van De Kamp in the original pilot for Desperate Housewives but was replaced by another recurring Enterprise actor, Steven Culp, for the series. Burke also appeared in three episodes of 24 in 2007, co-starring James Cromwell and Alexander Siddig. 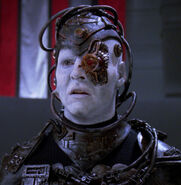 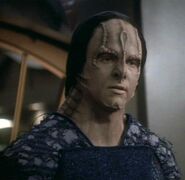