Born in Hollywood to actor and building contractor Edward Tierney, Michael Tierney is the nephew of actors Scott Brady and Lawrence Tierney.

In 2000, Tierney worked as writer, director, actor and producer on his debut Evicted. The film features his uncle Lawrence Tierney and his cousin Terence Tierney and opened the 1st Annual Melbourne Underground Film Festival in Melbourne Australia in July of 2000. Following a supporting role in the 2002 drama White Boy, Tierney started a career as Joe Blow in the adult film industry. Between 2005 and 2010 he worked on over 150 video productions and received two Adult Video News Award nominations in 2007 and 2011.

Tierney left the adult film business in 2010 and produced and starred in the documentary The Last Days of Joe Blow in 2013. [1] He is also writing the nonfiction novel "Hardcore" about these years.

More recently, Tierney was cast in the thriller The Second Coming, released in 2015. 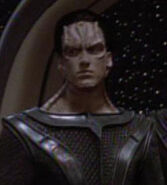 Cardassian Alliance officer
DS9: "Through the Looking Glass"
(uncredited)
Add an image to this gallery

Retrieved from "https://memory-alpha.fandom.com/wiki/Michael_Tierney?oldid=2463715"
Community content is available under CC-BY-NC unless otherwise noted.