Bajoran civilian; Bajoran Pah-wraith follower; Mari spectator
Michael Wajacs (born 4 February) is an actor, musician, and singer who was one of the regular background performers on Star Trek: Deep Space Nine and also in a few episodes of Star Trek: Voyager. He received no credit for his appearances.

Since 1968 he has been a member of the Screen Actors Guild and since 1970 a member of AFTRA. Among his earliest work are two 1968 episodes of the comedy series Julia where he appeared as Homer Lang.

Television work includes episodes of Almost Perfect (1996, with David Clennon), Significant Others (1998), and L.A. Doctors (1998, with Rosemary Forsyth and Camille Saviola). More recently, he appeared in the short drama Franchise (2012) and in episodes of Bosch (2018, with Titus Welliver, Jamie McShane, and Kristen Ariza) and Schooled (2020). 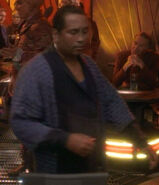 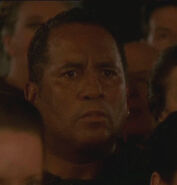 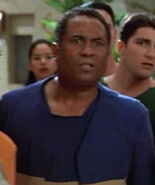