Michael Zurich is an actor who appeared as a background performer in several episodes of Star Trek: The Next Generation and played the recurring part of a Bajoran security deputy in the first three seasons of Star Trek: Deep Space Nine.

Zurich played Agent Zurich in the 1993 thriller In the Line of Fire, with Clyde Kusatsu and appreared in the television series seaQuest DSV (1993, with Stephanie Beacham, Marco Sanchez, W. Morgan Sheppard, Richard Herd, and Frank Welker), Vengeance Unlimited (1999, with Jeff Austin and Claudette Sutherland), and Monk (2007, with Stanley Kamel and Gina Philips). He was featured in the crime thriller Shade (2003, with Michael Dorn and Mark De Alessandro) and performed stunts in Ridley Scott's science fiction film Blade Runner (1982, with Joanna Cassidy and stunts by Janet Brady, Gary Epper, and Beth Nufer).

In addition Zurich served as stand-in on the television film Precious Victims (1993, with Cliff DeYoung) and the trilogy Midnight Run (1988), Midnight Run for Your Life (1994), and Another Midnight Run (1994), starring Christopher McDonald in the latest two films. 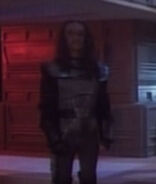 Retrieved from "https://memory-alpha.fandom.com/wiki/Michael_Zurich?oldid=2420310"
Community content is available under CC-BY-NC unless otherwise noted.