These lifeforms were comprised of silicon, germanium, gallium arsenide, cadmium selenide, sulfide, water, sodium salt, and various impurities. These are indicative of conductive properties as well as enable transistor-like behavior and light emission. There was also trace quantities of cadmium salts, which served as a method of converting infrared radiation into electricity for energy. They could reproduce, expelling large amounts of energy in the process, much like organic life.

The lifeforms lived in layers of soil which had access to large saline water tables as well as sunlight. The water table served as a connectivity mechanism between all the microbrains, forming a sophisticated collective consciousness.

These lifeforms could communicate via electricity as well as light emission. They could also communicate with computers extremely well, using bolts of negatively and positively charged ions to form program instructions at high speed. They were highly intelligent, being able to teach themselves to communicate with the Federation starship USS Enterprise-D's computer.

Between 2360 and 2364, the Federation had built a terraforming station, Velara Base, on the planet which, unknowingly, increasingly impacted the microbrains' environment. The microbrains had tried to communicate with the base team through light emissions with no success. It wasn't until 2364 when they decided to take action and killed Arthur Malencon when he tried to disturb their water table. Intervention by the Enterprise crew proved the lifeforms' existence and intelligence, and the terraforming project was abandoned. However, the microbrains still distrusted them and forbade contact for three centuries. (TNG: "Home Soil")

The lifeform from Velara III was voiced by an unknown actor. 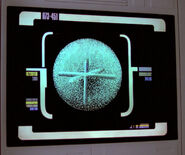 A graphic of a microbrain 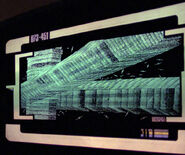