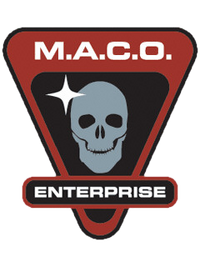 Military Assault Command Operations, or MACO (pronounced "MAY-ko") for short, was a Terran Empire military organization in service during the 2150s. MACOs served aboard Starfleet starships and could hold positions at least as high as first officer.

A detachment of MACOs were stationed aboard the Terran flagship ISS Enterprise under the command of Captain Maximilian Forrest in the 2150s. They were responsible for the guard posts on the bridge, the brig, and the room containing the agony booth.

In 2155, Commander Jonathan Archer was able to convince Major Malcolm Reed, the commanding officer of the MACO detachment and co-inventor of the agony booth, to back his mutiny against Captain Forrest so Enterprise could be diverted to Tholian space. Like Forrest, Archer then also chose a MACO as his personal guard, in this case Sergeant Travis Mayweather. (ENT: "In a Mirror, Darkly")

After Enterprise was destroyed while the USS Defiant was captured from the Tholians, MACOs were used to interrogate the alien slave labors about acts of sabotage, committed by the Gorn slavemaster Slar. MACOs were also responsible for the hunt to kill Slar in the Defiant's secondary hull, and several of them were killed or wounded before he was captured and killed by Archer.

Sergeant Mayweather was also instrumental in Hoshi Sato's betrayal of Archer and takeover of Defiant, an act which culminated in her declaring herself Empress. (ENT: "In a Mirror, Darkly, Part II")

Their weapon seems very similar to an XM8 modular battle rifle in function and size, including the marksman variant seen in "The Xindi". The rifle in sniper mode also bears a strong resemblance to the Federation sniper rifle from the Star Trek: Voyager - Elite Force video games, which preceded Enterprise.

The mirror universe mission patch was a skull. This star and skull symbol is reminiscent of the World War II US Marine Raiders patch. Their motto was "Ever Invincible."

Retrieved from "https://memory-alpha.fandom.com/wiki/Military_Assault_Command_Operations_(mirror)?oldid=2410847"
Community content is available under CC-BY-NC unless otherwise noted.