Miral Paris was the Human/Klingon hybrid daughter of Lieutenants junior grade Thomas Eugene Paris and B'Elanna Torres, officers aboard the Federation starship USS Voyager. She was the granddaughter of Admiral Owen Paris, John Torres, and Miral.

She was born in the year 2378 on stardate 54973.4, the second of two children born aboard Voyager, the first being Naomi Wildman, daughter of Voyager officer Ensign Samantha Wildman six years earlier. Miral was born just before Voyager reached Earth after a long journey home from the Delta Quadrant, delivered as Voyager traveled through a Borg transwarp conduit. She was named after B'Elanna Torres' mother Miral. (VOY: "Endgame", "Author, Author") 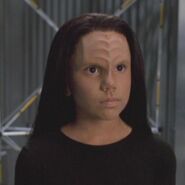 A hologram of 12-year-old Miral Paris

Shortly after discovering she was pregnant, B'Elanna became unsettled, remembering how her Klingon heritage had made her a subject of ridicule growing up, and, she felt, had been part of the reason her father had left the family. As a result, B'Elanna wanted to have Miral undergo gene therapy in utero, and even sabotaged The Doctor's program to have him do so, but ultimately Tom helped her to come to terms with her insecurities. Later, after reversing the alterations to The Doctor, Torres asked The Doctor to be the baby's godfather, to which he elatedly accepted. (VOY: "Lineage")

Miral was considered by a sect of Klingons to be the Kuvah'magh, the chosen one to lead the Klingon Empire back to glory, even though she was only ¼ Klingon. This may have been the case, for her ¾ Human genome was able to cure a rare Klingon disease known as nehret. When Captain Kohlar left Voyager for his new home, he gave Torres his great-grandfather's antique bat'leth as a gift for Miral. (VOY: "Prophecy")

In an alternate timeline in which it took Voyager twenty-three years to get home, Miral had joined Starfleet, and had become an ensign by 2404. She had been sent on a six-month mission by Admiral Kathryn Janeway to negotiate an exchange with Korath – his prototype chrono deflector in exchange for a place with the Klingon High Council. She succeeded as far as Korath agreeing to the exchange, but only with Admiral Janeway in person. Janeway traveled to meet them, then dismissed Miral, saying that she should spend some time with her parents. Miral was fiercely protective of Janeway, threatening to break the arm of two Klingons who accused Janeway of being disrespectful. This made Janeway chuckle and comment that Miral was "her mother's daughter". (VOY: "Endgame")

Miral's first appearance in the episode "Lineage" was computer-generated; the newborn Miral in "Endgame" was played by siblings Carolyn and Mathew Corley.

The adult Miral was played by Lisa LoCicero, with "Endgame"'s script notes describing her as "Attractive, in her mid-twenties, she's the daughter of Tom and B'Elanna. One quarter Klingon, she has slight ridges on her forehead and wears a Tactical uniform." Although the character did not receive a first name on-screen, as she was only addressed as "Ensign Paris" in an alternate timeline, she was named "Ensign Miral Paris" in the same script notes. This script notation hearkens back to the episode, "Author, Author", in which Tom Paris and B'Elanna told her father they were considering the name "Miral". The same script also settles doubt as to the child's last name raised by B'Elanna in the closing moments of "Drive". While on their hastily-arranged honeymoon, B'Elanna suggested, perhaps in jest, that it be Tom who gave up his last name to become "Tom Torres". In settling on "Miral Paris" in the "Endgame" script, the writers confirmed that this did not come to pass.

Another possible name for this character was suggested in "Prophecy", where "Kuvah'magh" was seriously contemplated.

In the Voyager novels set after the end of the series (including Homecoming, The Farther Shore, and the Spirit Walk duology), B'Elanna and Tom took her to Boreth to look for her namesake. B'Elanna and Miral stayed on the planet when Tom returned to duty aboard Voyager as Chakotay's new first officer. In Full Circle, Miral was kidnapped by a Klingon religious group in order to protect her. When found by B'Elanna and Tom, B'Elanna and Miral faked their deaths, and their names showed up on a casualty list from Sector 22093 after the Borg attacks in A Singular Destiny, although they eventually met up with Voyager and a slipstream-capable fleet in the Delta Quadrant when the ship returned to meet up with its old contacts. In The Eternal Tide, as part of his last actions before sacrificing himself to save the universe, Q junior undoes Miral's destiny by arranging for the religious group hunting her to have died during the Borg's recent invasion of Earth, thus sparing her from the burden of being her people's messiah that she has faced all her life. In A Pocket Full of Lies, she becomes a big sister when her mother gives birth to a son, Michael Owen Paris, named after his grandfathers.

In Star Trek Online, Miral joined Starfleet, graduating from Starfleet Academy in 2402; by 2409, the year the game's story begins, she holds the rank of lieutenant and serves as chief of security aboard the USS Kirk. She is kidnapped by a group of Klingons, led by Ambassador B'Vat, who believe her to be the Kuvah'magh. As the player investigates, they find the Klingons have been experimenting with Miral's genetic code utilizing the skills of Amar Singh, a descendant of Khan Noonien Singh. With the aid of the Guardian of Forever, the player must pursue B'Vat to the year 2270, where they encounter the original USS Enterprise and face down B'Vat aboard a 25th century Raptor-class vessel given to his past self, a captain in the Klingon Defense Force. At the end of the quest chain, Miral leaves some of her genetic code behind, which allows the Klingons to replicate it and provide a cure for the augment virus which had already ravaged the Klingon people, before returning with the player to the present day.

Miral returned in Season 10, voiced by Lisa LoCicero, the actress who played the adult Miral in "Endgame"; LoCicero also voiced Miral for the earlier missions mentioned above. A year after her kidnapping by B'Vat, Miral has been promoted to lieutenant commander; with the Kirk damaged by the Iconian Herald fleet during the unsuccessful effort to protect the Preserver archive on Lae'nas III, she has been temporarily assigned as captain of the USS Bern as a part of "Delta Flight", an elite team of Federation, Klingon, and Romulan pilots led by her father. [1]