Thomas Morgan Woodward (16 September 1925 – 22 February 2019; age 93) broke into television and movies in the same year, 1956. He worked steadily until his retirement in the late 1990s, with parts in dozens of movies and several television series, and well over a hundred television guest appearances.

Woodward also played Boss Godfrey, "The Man with No Eyes", in the iconic 1967 film Cool Hand Luke. He also appeared in John Cassavetes' acclaimed 1976 film, The Killing of a Chinese Bookie, which also featured Seymour Cassel and Robert Phillips.

He made two Star Trek appearances, both in Star Trek: The Original Series, in episodes directed by Vincent McEveety, both as phaser-wielding characters with severe mental problems, and both co-starring Ed McCready. Woodward filmed his scenes for "Dagger of the Mind" between Wednesday 10 August 1966 and Friday 12 August 1966 at Desilu Stage 9 and his scenes for "The Omega Glory" between Friday 15 December 1967 and Friday 22 December 1967 at Stage 11, Stage 10 and Paramount's B Tank. 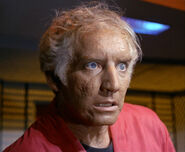 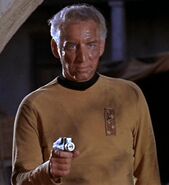