Movie Magic was a documentary series which focused on the creation of film and television special (SFX) and visual effects (VFX), and was broadcast in the US by the Discovery Channel.

Seventy approximately twenty-five minute episodes were produced and broadcast over five seasons between 1993 and 1997. The series was produced by a succession of production companies which included GRB Entertainment, Glacier Point, and Sequoia Entertainment, Inc. An in French dubbed/subtitled version of the full eighteen-episode first season of what was dubbed Le cinéma des effets spéciaux, is known to have almost simultaneously been aired in France on Canal+, starting on 13 March 1994. [1]

The the first season saw a 1994 three-volume LaserDisc home video format release by Amuse Video in Japan, followed by a single 1998 LaserDisc anthology with episodes taken from all seasons. The 8 episodes on the 1998 LD were also released on four Japanese DVD volumes the same year by Toshiba. [2] No other home video releases are known to exist to date.

The series had featured many SFX and VFX production staffers, who had worked for Star Trek, but were in the series featured for other productions. Several episodes are currently preserved for posterity on the video sharing website YouTube.

The series did however, feature two episodes with a specific focus on Star Trek productions,

Season 1, Episode 11: "Models and Miniatures – A Model of Perfection"

This episode was broadcast in 1994 and was entirely devoted to Star Trek productions, particularly the episodes "The Best of Both Worlds, Part II" and even more specifically "Emissary", the pilot episode of Star Trek: Deep Space Nine as the more recent one. Largely focused on the art of miniature photography, it presented behind-the-scenes effects footage and interviews with Howard A. Anderson, Jr., Richard C. Datin, Jr., Robert Legato, Dan Curry, Gregory Jein, and David Carson, whereas Tony Meininger was featured at work, though not providing any spoken commentary. This was the episode that was also aired almost simultaneously in France on Canal+ as "Maquettes et Miniatures". [3]

This episode was included as the first one on the first volume, subtitled "file: 1/3", of the 1994 Japanese LaserDisc releases, [4] whereas the 1998 release did not contain any of the Star Trek episodes. [5]

This episode was broadcast in 1995 and further explored the special effects created for "Emissary", re-using much of the footage already shown in the 1994 episode, including the Robert Legato interview. 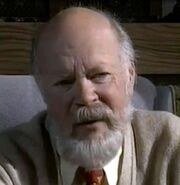