The androids of the planet Mudd originated in the Andromeda Galaxy. They were constructed by an unnamed humanoid species for the purpose of performing necessary service functions, freeing their makers to evolve a perfect social order. Large groups of androids were sent to establish outposts for various purposes. At one time, there were many such outposts of androids scattered throughout the stars, but when the sun of their home world went nova, the android's "makers" slowly became extinct. By 2267, only a single outpost has remained. Located on a K-class planet in the Milky Way Galaxy, the original purpose of the android outpost was to adapt the planet for productive use. They had managed to build vast libraries, impressive medical research laboratories, and cutting-edge engineering shops until the slow march of time caused them to lose focus on their original purpose. The accidental arrival of the Human Harcourt Fenton Mudd sometime in late 2266 or early 2267 brought the androids a new, if misguided, purpose.

The androids consisted of a single coordinator named Norman, who utilized a central control complex to join some 205,308 individual androids into a mass brain, forming one gigantic, highly intelligent mind. The androids were divided into groups of identical models each numbering up to 500 units. Among these were the Herman series, the Oscar series, and many others. Constructed of a self-renewing plastic over a skeleton of beryllium-titanium alloy, none of the android bodies had ever worn out, but the estimated duration is 500,000 years. While the android collective brain is vast and formidable, it had a weakness in its inability to process logical paradoxes and irrational behavior.

When the planet was stumbled upon in 2267 by fugitive Harcourt Fenton "Harry" Mudd, the androids dubbed him Lord Mudd the First. Serving Mudd with near-absolute loyalty, they nevertheless held him against his will. While prisoner and ruler of the android population, Mudd ordered the construction of an additional 2,501 androids, most of which were very attractive female models, including the Alice series, the Barbara series, the Maizie series, the Trudy series, and the Annabelle series. In addition, he commissioned a single android in the image of his estranged wife Stella, whom he could command to be silent at will to amuse himself.

Needing beings to serve, and being less than satisfied with Harry Mudd as the sole provider of purpose, the androids promised to allow him to leave if he would help them secure new specimens to serve. At Mudd's direction, Norman posed as a Starfleet officer and commandeered and sabotaged a Federation starship, the USS Enterprise, and forced it to the planet Mudd. The androids long observation of Harry Mudd caused them to draw certain negative conclusions about the Human race as a whole. Although realizing that Mudd was flawed even for a Human being, the androids nevertheless determined that the Human race was much too greedy and corruptible to have free run of the galaxy. They determined the best way to control Humanity's aggressive and inquisitive instincts was by serving them, until Humans became completely dependent on them, happy and controlled. (TOS: "I, Mudd")

Using a combination of irrational behavior and logical paradoxes, the androids were eventually overcome by the Enterprise crew with the assistance of Harry Mudd. With the androids incapacitated, it became possible for the Starfleet personnel to reprogram the androids to continue once again the project they had been sent to the planet to accomplish. In addition, the androids were to be left with custody of Harry Mudd, not as a sovereign ruler, but instead as a "first-class example of a Human failure", to be observed in order to avoid similar individuals in the future. In addition, 499 new androids were commissioned by Starfleet Captain James T. Kirk, based upon Harry Mudd's original Stella design, including its characteristic shrill and shrewish demeanor, but without any regard for Harry's command for it to "shut up". In spite of Harry Mudd's rather colorful reputation and auspicious history, Federation records well into the 2360s still referred to the planet as "Mudd", and presumably the androids are likewise named "Mudd-type androids" in tribute to "Lord Mudd I", the first sovereign ruler of the planet. (TOS: "I, Mudd"; TNG: "Conspiracy") 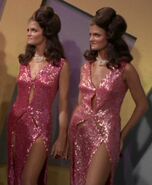 The Barbara series
Add an image to this gallery

Retrieved from "https://memory-alpha.fandom.com/wiki/Mudd_androids?oldid=839616"
Community content is available under CC-BY-NC unless otherwise noted.