This Romulan commander served aboard the Narada and was in command of the bridge when Nero and Ayel hunted James T. Kirk down. When Nero returned to the bridge he informed him about Spock's actions. (Star Trek)

This Romulan female served as communications officer aboard the Narada when Nero traveled with the mining ship through time to revenge the fate of his homeworld. She served on the bridge of the mining vessel. She died when Spock set a collision course with the Jellyfish and the Narada was pulled into the black hole. (Star Trek)

These Romulans served as crewmembers aboard the Narada under the command of Nero. (Star Trek) 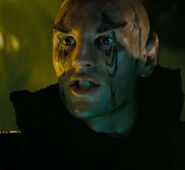 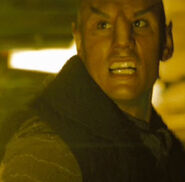 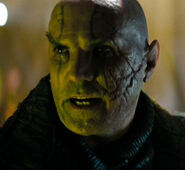 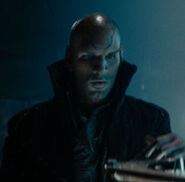 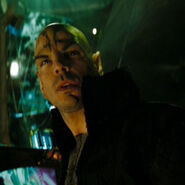 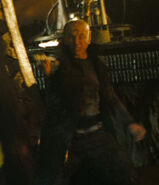 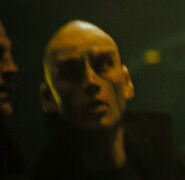 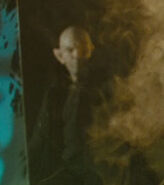 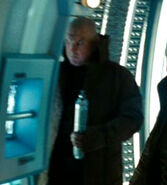 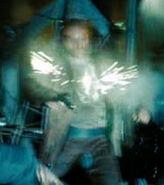 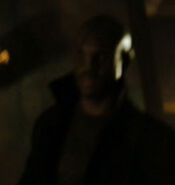 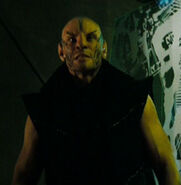 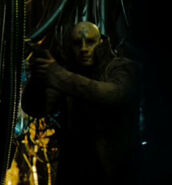 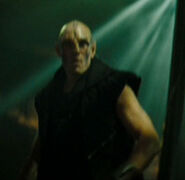 This engineer served aboard the Narada and was on the bridge when the ship was destroyed. (Star Trek)

The Romulan engineer was played by background actor Joseph Steven who received no credit for his appearance.

These two guards protected the drill platform while in orbit of Vulcan. They defended the drilling rig from James T. Kirk and Hikaru Sulu who landed on the rig. The first Romulan fought against Kirk until Sulu landed on the rig and attacked him with his retractable sword. He was killed by a burst of flame from a vent after Sulu kicked him towards the vent seconds before it opened again. The second Romulan wrestled Kirk and threw him off the edge of the platform, but Kirk was able to hang onto the edge, kilometers above the surface of Vulcan. The Romulan tried to stomp Kirk's hands to force him to release his grip, but was stabbed by Sulu from behind and then fell off the platform himself. (Star Trek) 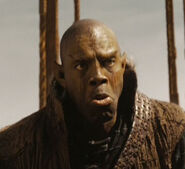 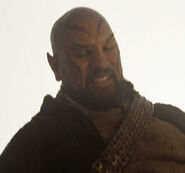 This helmsman worked on a console of the bridge and also died when the ship exploded in the black hole. (Star Trek)

The Romulan helmsman was played by Jason Brooks. His dialogue was over-dubbed in post-production by Wil Wheaton.

This Romulan served as tactical officer aboard the Narada. He detected closing starships such as the USS Enterprise and the Jellyfish and reported to Nero. (Star Trek)

Script writers Roberto Orci and Alex Kurtzman claimed that both the baldness and tattoos of Nero and his shipmates were for "solidarity as a crew." (Star Trek Magazine issue 149, p. 13) However, Proteus FX Makeup Effects Supervisor Barney Burman stated that the Romulan crew's baldness was "to keep their hair from getting dirty as they worked." (Star Trek Magazine issue 155, p. 57)

Originally, Neville Page was tasked with imagining how the Narada crew might look different from other Romulans, given that the crew members were separate from the Romulan Empire with which they were familiar. It was Page who conceived the idea of using tattoos to differentiate the Narada personnel, thinking up the concept at that point. He later apologized to the body art community for taking advantage of the widely held misconception that facial tattoos indicate that a person is dangerous.

About the same time as Neville Page decided upon using tattoos for the Romulan crew, it was imagined that – even though it was Romulan tradition to commemorate a loved one by skin-painting with paint that faded along with the period of mourning – the Narada crew had burned their tattoos deep, so that they would never fade. This back-story had to be planned before Page could make a start on the actual designing of the tattoos. [1] He designed the tribal-looking patterns digitally. (Star Trek - The Art of the Film, p. 37) Once he worked out how Nero's tattoos would look, Page was left with hundreds of tattoo configurations which, having been discarded for Nero, were consequently available to use for the rest of his crew.

Once the tattoo designs had been finalized, the application of the patterns was the next step. Drawing or painting them onto each performer's face were not endorsed methods. [2] Instead, the tattoos were chosen to be "a transfer process, like you'd find at an amusement park, only much more expensive," explained Neville Page. Sheets of paper showing his tattoo artwork were dispatched to Tinsley Transfers, which used the images to produce, Page estimated, a couple of hundred tattoos. (Star Trek - The Art of the Film, p. 37) The usage of these printed sheets of rub-on images saved the makeup artists hours of work and helped to ensure consistency. With the tattoos for the Narada personnel having to be appear aged, Mindy Hall, head of the makeup department, chose an appropriate color for the ink to be used for the Tinsley Transfers. [3]

The tattoos were added to the performers playing the Narada crew members by Joel Harlow Designs. The addition of the tattoos was the final stage in making the actors look Romulan. However, ensuring that each tattoo completely conformed to a performer's face was a laborious procedure. It was done by digitally adjusting the various tattoo configurations and testing them on lifecasts, which had been manufactured when creation of the Romulan facial appearances began. (Star Trek - The Art of the Film, p. 37)

Costume Designer Michael Kaplan decided how the Romulan crew were dressed in the movie. "I wanted the Romulans to look more like workers than cerebral Vulcans," he recalled, "to have a feeling of being pirates and barbarians. Their costumes were patchworks of different fabrics, like they've been stitched over and repaired." (Star Trek - The Art of the Film, p. 41) Kaplan also contrasted the Romulan crew to the Vulcans by saying, "There was much more rough and organic feeling to the Romulans. That barbaric feeling that I wanted them to have, more warlike." ("Props & Costumes", Star Trek (Three disc Blu-ray))

Director J.J. Abrams found that the Romulan crew, on the first day he filmed on the Narada set, seemed considerably intimidating. "I literally just broke out in a sweat because I was surrounded by all these, you know, bald dudes with face tattoos and, you know, pointy ears and the wardrobe," he related. "And I just... I was so afraid that it was gonna look insanely stupid." (audio commentary, Star Trek (DVD)/(Special Edition)/(Single disc Blu-ray)/(Three disc Blu-ray))

The ruggedness of the Romulan crew informed their style of fighting, about which J.J. Abrams had a long discussion with Ayel actor Clifton Collins, Jr.. Collins later observed, "These guys are very strong, very thuggish and very powerful. Their style of fighting wouldn't be a finesse-ful savat, or an aikido type of thing: they're like brutal space cavemen. The style is something that accommodates that body structure." (Star Trek Magazine issue 146, p. 28)

In the Star Trek prequel comic book Star Trek: Countdown, the back-story about the Romulan crew deeply burning their tattoos into their skin was included in the storyline.

The Star Trek: Nero miniseries names several more crewmembers. Nero calls one of them Xandr as well as another by the name of Baratt. Baratt is one of several crew members who request to fly to the Romulan homeworld mere minutes after the Kelvin's destruction, a request that Nero seems to grant at first before later firing and destroying the shuttle that Baratt and several others presumably fly in.

In the Star Trek: Ongoing story arc "Legacy of Spock", two Narada crew members, Vella (β) and Arix (β), escape Rura Penthe and return to Romulus, where they are tasked with destroying all surviving Vulcans with what remains of the red matter. Though Vella is eager to do so, Arix incapacitates Vella, having decided to destroy the red matter by detonating it a safe distance away, swallowing up the ship and the two of them instead. Shortly before doing so, he explains in a communication to the Enterprise that although they are supposed to be enemies, he is only a miner and has no wish to cause such destruction.

In the game Star Trek: Fleet Command, the Klingons task the player with capturing a Narada communications officer by the name Javaid (a name previously used in Star Trek: Rivals to refer to a character played by Damion Poitier that died on the drilling platform on screen in the 2009 film). The player can then choose whether to let Javaid go after a confrontation or capture them to stand Klingon justice. After the conclusion of that quest, Starfleet will communicate with the player to ask them to capture Arix, while assuring the player that Starfleet will be more lenient with him than the Klingon Empire. Once the player catches up to Arix, the player can choose whether to let him go or attempt to capture him. If they attempt to capture him, Arix will put up a fight which will lead to his death.

Later on in the game, the player will come across Livis, a security officer from the Narada who was supposedly next in line after Ayel in rank (Livis was the name previously given by Star Trek: Rivals to the communications officer briefly seen in the film). According to Livis, Commander Keane from Starfleet had been chasing after him and his crew for some time. Believing that only the Commander's death could bring them peace, Livis then gives the player a choice whether to aid Livis in killing Keane or to stop Livis then and there.