Ranks of the National Socialist Party provided a hierarchy and chain of command for individuals serving in the various branches of the party, paramilitary, and military. These ranks were often displayed in the form of rank insignia on National Socialist uniforms.

The military ranks used by the German Army, or Heer, were based on the same rank structure used by many other Earth armies. Their rank insignia was worn as a combination of a collar patch and shoulder epaulet. (VOY: "The Killing Game, Part II"; ENT: "Storm Front", "Storm Front, Part II")

Of the list below, only two ranks were referenced by name in dialogue, "Leutnant", as stated by Q while addressing Jean-Luc Picard who held the comparable Starfleet rank of lieutenant junior grade in the Star Trek: The Next Generation episode "Tapestry", and "Hauptmann", as stated by Brigitte, made in reference to an SS-Hauptsturmführer in the Star Trek: Voyager episode "The Killing Game". Contrarily, in the case of the "Generalmajor", only the English equivalent of "General" was used, as spoken by the Na'kuhl, Vosk.

The paramilitary ranks used by the Schutzstaffel were implemented in Nazi Germany from the 1930s until their defeat in 1945.

Their rank insignia consisted of a black patch with a combination of a leaf, stripe, or pip. Where the leaf with a combination of pips, was worn by the rank of colonel and higher. Pips and stripes were worn by both commissioned and non-commissioned officers, with the latter wearing an additional thick white piping along the collar. Ordinary SS soldiers, i.e. mann (or private), wore a blank rank patch. (TOS: "Patterns of Force"; VOY: "The Killing Game", "The Killing Game, Part II"; ENT: "Storm Front", "Storm Front, Part II")

In addition to collar insignia, SS uniforms also used shoulder straps to denote rank (by type of epaulet) and position (by color).

There were generally five distinct epaulets worn with each uniform. They consisted of either a wide silver or gold braid for flag officers, much like those worn in the Heer, a thin twisted silver cord for senior officers, an epaulet parallel silver cords for junior officers, a black epaulet with thin white cord around the border for SS troopers, and a black epaulet with thick silver embroidered around the border for non-commissioned officers. Silver or gold pips, as found on collar insignia, were further used to denote level of rank on each epaulet. (VOY: "The Killing Game", "The Killing Game, Part II"; ENT: "Zero Hour")

A resurgence of the Nazi Party occurred on the planet Ekos during the 2260s, after the Ekosians were introduced to their concepts by Federation historian and cultural observer, John Gill. (TOS: "Patterns of Force")

None of the German language equivalent terms represented below were used on screen, and in many cases, the English equivalent was otherwise used (i.e. colonel, major, lieutenant, trooper), when referenced.

The military ranks used by the Ekosians were based on the same rank structure as their German Nazi benefactors, where the rank insignia was worn as a combination of a collar patch and shoulder epaulet. (TOS: "Patterns of Force")

The Ekosian Sturmabteilung wore uniforms bore insignia comparable to their German-Nazi predecessors, which included a plain golden-yellow or scarlet collar patches on the left to indicate rank, and another patch of the same color on the right with their unit number. (TOS: "Patterns of Force")

The SS on Ekos wore rank insignia much the same way as the German SS did on Earth. All SS members wore an SS collar tab on the right followed by a service designation collar tab worn on the left.

Individual rank was displayed by epaulets (one on the right shoulder for all black SS uniforms and on both shoulders for all other SS uniforms).

Although Doctor McCoy was recognized as an SS colonel, his uniform and insignia are not included in the table below since he was technically wearing a German SS uniform created by the Enterprise computer, not a uniform procured from the Ekosian SS, as his insignia was otherwise recognized as a major by the Ekosians. Similarly, the soldier identified on Ekos as a corporal wore the German SS insignia of a staff sergeant.

When the USS Enterprise made contact with the planet Ekos, the only observed Ekosian SS generals were dressed in black uniforms worn with heavy gold epaulets and oak leaf collar patches in various patterns. At a special speech given by John Gill, four SS-Leaders in general's rank were in attendance two of whom were SS wearing patches indicating the positions of Brigadeführer, and Reichsführer-SS. (TOS: "Patterns of Force")

Unlike their unbeknownst German counterparts, the Esokian master sergeant wore a much more elaborate insignia, with gold pips and an epaulet consisting of a gold braid that was otherwise shared with general officer ranks.

The ranks of the SS soldiers also included a recruit type position which wore an SS uniform without any insignia.

While "The Killing Game" and "Storm Front" portray SS uniforms with mostly correct badges and insignia, there were still a few notable costuming inconsistencies.

These included the instance in "Zero Hour" of a second lieutenant wearing the same patches on both his collar, which was correct, as well as his epaulets, which was not correct. There was also a noticeable costuming change between "Zero Hour" and "Storm Front", where the SS officers in the first episode wore standard SS runes on their left collar, but were replaced in the second episode where all SS soldiers wore the insignia of the SS-Totenkopfverbände (Death's Head units), those who were otherwise in charge of concentration camps.

"Patterns of Force", however, was wrought with numerous insignia inconsistencies with regards to the SS uniforms portrayed. Almost ironically, the author of the otherwise critical reference The Nitpicker's Guide for Classic Trekkers (p. 201), indicated that "[t]his episode had to be a continuity nightmare with all the uniform changes. The creators do an excellent job of keeping everything straight." While these errors can easily be explained away as one culture's application of another culture's ranking system, they are clearly a case of costume production errors, mostly due to scenes being filmed out of sequence.

Many of these errors are demonstrated in the charts above, in the many instances of uniforms sporting mismatched collar insignia and epaulets, which did not pair correctly with one another. Where, for example, the military SS lieutenant, encountered by Kirk and Spock at the start of the episode, wore the should straps for a major, but the collar badges of a second lieutenant. Likewise, SS personnel encountered at the Chancellery Detention Center, specifically the SS interrogator and an SS guard outside the weapons lab, wore commissioned officer's epaulets with an enlisted officer's collar badges.

The perhaps most contradictory example, was in the costuming of the SS-major who arrests Kirk and Spock, who was, in fact, wearing a single, modified version of an SS colonel's collar insignia. Based on surviving script and costume notes, this occurred due to the wardrobe department receiving an order for an SS-major's uniform, but basing it the insignia on a United States major (gold oak leaf) instead of an SS major (four pips). The second error was that, not only was he wearing the wrong insignia, but he wore only a single leaf, paired with SS runes, rather than the otherwise accepted matched-pair of oak leaves, as was later correctly displayed on McCoy's uniform SS-colonel insignia. 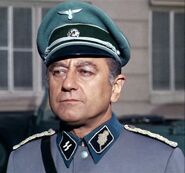 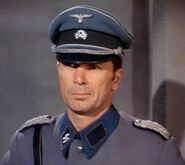 Ekosian lance corporal wearing the epaulets of a lieutenant

The first two occur after both Spock and Kirk steal their first set of SS uniforms. In both cases, the rank insignia change from the original wearer's old rank to completely new ranks when Kirk and Spock emerge wearing the same uniform in subsequent scenes. Most evident was the inclusion of stripes, which were previously absent on the original wear's uniform altogether. 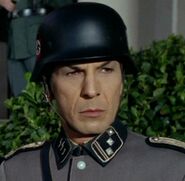 After Kirk stole his uniform from its former Ekosian owner, Kirk's collar badge was changed, appearing as an apparently improvised insignia with consisted of three parallel silver pips with the last pip pinned on top of a pair of silver bars. Though stolen from a second lieutenant, his badge was more reminiscent to that of a first lieutenant (three silver pips placed diagonally alongside a pair of silver bars), but went otherwise unnoticed by numerous Ekosian Nazis. He carried the same rank following his third uniform acquisition, this time with the bottom of three pips appearing in gold, again, his uniform went unnoticed, even while in a room full of top Nazi Party leaders and representatives. 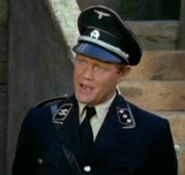 ...and later accented with a gold pip.

Lastly, in the same time frame, Spock undergoes a grade reduction during his second round in Nazi attire, as he initially exited an automobile as part of the "Führer's Special Documentary Corps" as a sergeant, but is demoted to private between scenes after entering the Ekosian Chancellery. 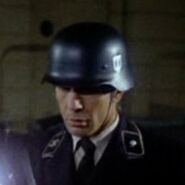 Spock downgrading his pips from sergeant...