Nerd Block Inc. was a Canadian subscription box marketing and distribution company which was based in Whitby, Ontario and founded by Russ Montague in 2013. It operated in a number of countries worldwide before going into bankrupcy in 2017. [1] [2]

The company released a 4.25 inch-long "exclusive" "Springz" USS Enterprise car dashboard accessory, similar to a bobblehead, in its September 2015 "Hyperspace"-themed "mystery package". An almost identical product was retailed in February 2016 by The Coop in its "Boinglers" line.

Other Star Trek-branded novelties were released by Nerd Block (and its "Sci-Fi Block" brand) including a tribble screen cleaner, a Vulcan salute car air freshener, an Anovos circa-2278 Starfleet captain's pin, and Skele-Treks figurines produced by NECA. [5] 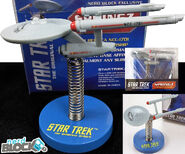 Retrieved from "https://memory-alpha.fandom.com/wiki/Nerd_Block?oldid=2236481"
Community content is available under CC-BY-NC unless otherwise noted.