The New Orleans-class frigate was a Federation starship class that was in service during the mid-24th century. (TNG: "Conspiracy")

The vessel shares several design elements with the Galaxy-class, and featured at least three sensor pods along the primary and secondary hulls.

The name of this class was never spoken on screen, but was derived from the starship mission status okudagram that first appeared early in TNG Season 4. It is from the information on this status chart that USS Thomas Paine, previously identified in "Conspiracy" as a "frigate," is clarified as being a member of this class. The Kyushu and Renegade were classified as New Orleans-class frigates in an internal list of starships, dated September 26, 1990. [1] This information was later presented in the Star Trek Encyclopedia (4th ed., vol. 1, p. 449; vol. 2, pp. 79, 216). The Rutledge was classified as a New Orleans-class frigate in the Star Trek Encyclopedia (4th ed., vol. 2, p. 333). However, because the relationship of the Renegade and Rutledge with this class has not (yet) been confirmed on screen, they are listed here as "uncertain".

According to the Star Trek Encyclopedia (4th ed., vol. 2, p. 79), the class "was named for the ship we called the City of New Orleans."

The New Orleans studio model was designed/built by Ed Miarecki and appeared as wreckage in the graveyard scene in "The Best of Both Worlds, Part II". [2]

According to the Star Trek Encyclopedia (4th ed., vol. 1, p. 449), "the studio model of the Kyushu was never built as a full photographic miniature, but was used in the "graveyard" scene of the aftermath of the battle of Wolf 359." The model was kit-bashed from parts of AMT/Ertl USS Enterprise-D model kit No. 6618, embellished with several custom additions (such as two text markers as sensor pods on top of the saucer, with a third one attached on the ventral side of the model) to create the impression of a ship much smaller than the Galaxy.

"New Orleans-class U.S.S. Kyushu. Again, a scaled-down Galaxy saucer (meaning it was made from an Enterprise kit, but with a larger bridge and larger windows, intended to imply a smaller ship). Two nacelles on pylons above the center axis of the ship. I think this was my favorite of the Miarecki study models. At Dan Curry's suggestion, I added two or three "outboard pods" to the ship in an effort to make it look a little less Enterprise-like. The photos in the Encyclopedia are all photos of the study model, retouched [note: by Doug Drexler] to add lights in the windows. I took the photos just before starting the battle damage work." [3] 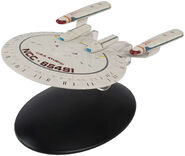 …and the commercial display model it spawned

A publication CGI model of the New Orleans class was built for the first time by Fabio Passaro around 2016, for use in Eaglemoss Collections' Star Trek: The Official Starships Collection partwork publication. Constructed in LightWave 3D, Eaglemoss' software package of choice, this model features higher polygons, new hull detailing, lightmaps, and higher resolution textures not seen on screen.

According to Star Trek: The Official Starships Collection, a New Orleans-class starship had a crew of five hundred and a top speed of warp 9.3. This top speed was sustainable for twelve hours. Additionally, this class had a cruising speed of warp 6 and was equipped with ten Type X phaser arrays and three photon torpedo launchers. It also lists the ship with a length of approximately 340 meters.