Multiple (See below)
Nicole Dickinson is a stuntwoman and actress who worked as stunt double for Mary Chieffo in the first and second season of Star Trek: Discovery.

Additionally, she played several minor and background roles on the series, mostly Klingons or other aliens, wearing prosthetic makeup. She only received credit for her roles as Colt and Hadley, which were also the only times she spoke on screen. 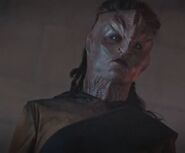 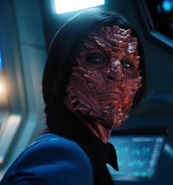 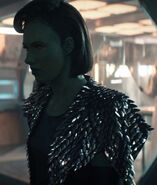 Ni'Var spectator
DIS: "Unification III"
(uncredited)
No image yet
Regulator
DIS: "There Is A Tide..."
Add an image to this gallery

Stunt double for Mary Chieffo
DIS: "Will You Take My Hand?"

Stunt double for Mary Chieffo
DIS: "Point of Light"
Add an image to this gallery

Retrieved from "https://memory-alpha.fandom.com/wiki/Nicole_Dickinson?oldid=2731400"
Community content is available under CC-BY-NC unless otherwise noted.