2268 – 2269
Normal routine aboard the starship Enterprise, cruising through the Sigma Draconis group to locate and contact new planets. But suddenly, the whole craft was flung into shocked chaos!

While exploring the Sigma Draconis System, the Enterprise suddenly comes to a complete halt. Recovering from the jolt, the bridge crew try to get their bearings, and Doctor McCoy and Nurse Chapel escort an injured helmsman Sulu to sickbay. Deflectors and video-scanners not functioning, Spock looks out of a porthole, only to see empty darkness. Frustrated, Kirk fires booster rockets, but they don't respond either. Spock uses the atmospheric analyzer and discovers that the ship lies at the bottom of a sea. Shocked and perplexed, Kirk and Spock obtain pressure suits and go outside to investigate.

The airlock floods with liquid, and a variety of sea creatures confirm Spock's readings. Kirk is attacked by a giant sea monster. Spock draws a phaser, but it doesn't work while submerged. The monster bites onto Kirk, and since there is a partial vacuum in its mouth, he is able to phaser-blast the beast, freeing himself. The two men then quickly get back on board the Enterprise.

Spock analyzes the liquid in the ocean, and learns that it has a previously unknown chemical composition, heavier than water. This is why the ship did not simply float to the surface. Uhura reports that the body of liquid isn't limited to a local area, but composes the entire planet. Kirk muses that the ship's deflectors must have parted the substance enough to let the ship in. As the crew discuss the situation, they hear a knock on a porthole window. The ship is surrounded by "fish-men", who promptly tow the Enterprise to their nearby city. They retrieve industrial tools from their city and attempt to penetrate the hull of the ship. Rather than let them drill, Kirk and Spock don their pressure suits and go outside to talk with them. The fish-men accuse the Enterprise of intruding, and ask where they came from. Kirk attempts to explain, but the fish-men reject the explanation as nonsensical and apprehend Kirk and Spock.

Inside the city, Kirk and Spock manage to escape, but Spock is recaptured. Back on the Enterprise, Kirk has Scott assemble a raiding party, armed with knives, spears, and clubs. The team frees Spock and Kirk steals a freeze-gun from one of the fish-men. This inspires Kirk to press on the attack. He reasons that if they capture a large enough "freezer", they can encase the Enterprise in ice and float it back to the surface. The fish-men immediately prove Kirk's prediction true, as they return with a tank equipped with a freezer. Kirk uses his freeze-gun to create a wall of ice, separating the tank from the fish-men reinforcements, and the raiding party easily takes over the tank.

The raiding party are sent back to the ship, and Kirk and Spock fire the freezer, coating the entire ship. The two swim quickly to the surface in the ship's wake, and Scotty activates the force deflectors, shattering the ice. The men scramble aboard, and the Enterprise blasts off into space.

"This you won't believe! We're under an external liquid pressure... thirty tons per square foot! Captain... We... We're at the bottom of the sea!"

- Spock, struggling to maintain his composure

"Fish-men! So there's more to this planet than monsters! They must have intelligence... look at their clothes!"

"This is the captain speaking! Now hear this! We appear to have been captured by the intelligent inhabitants of this place. For the moment there will be no retaliation..."
"You didn't tell the crew we can't retaliate, Captain!"

- Kirk and Spock, telling the crew only what they need to know

None of the UK weekly stories had titles. Each installment was two pages in length. 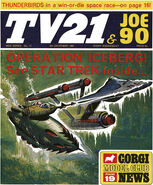 TV21 & Joe 90 #11: "OPERATION ICEBERG!" – Kirk attempts to free the ship from the depths of an ocean planet
Add an image to this gallery

Retrieved from "https://memory-alpha.fandom.com/wiki/Ninth_UK_Story_Arc?oldid=2530807"
Community content is available under CC-BY-NC unless otherwise noted.