USS Vengeance Bridge Officer 1; Niko; Reverse aging passenger
Nolan Ramsey North (born 31 October 1970; age 50) is an actor and voice performer who had a supporting role as a USS Vengeance Bridge Officer aboard the USS Vengeance in Star Trek Into Darkness and performed several voices in Star Trek: Lower Decks. According to TrekMovie.com North was asked by Abrams if he would work on the Trek sequel while working on Abrams' science fiction film Super 8, and North mentioned that it was a very small role. [1]

Born in New Haven, Connecticut, USA, North is probably best known for his voice work on the game series Uncharted (2007, 2009, 2011 and 2016) where he voiced the main character Nathan Drake, (with Richard McGonagle as the voice of Drake's mentor Victor Sullivan), and as protagonist Desmond Miles in the near-annual Assassin's Creed (2007 to 2012, with that character's father, William Miles, being voiced by John de Lancie). 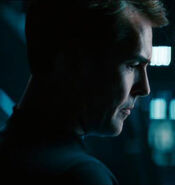 Reverse aging passenger
LD: "Much Ado About Boimler"
Add an image to this gallery

Retrieved from "https://memory-alpha.fandom.com/wiki/Nolan_North?oldid=2701959"
Community content is available under CC-BY-NC unless otherwise noted.