Doctor Noonian Soong (sometimes listed as Noonien Soong), who was nicknamed "Often Wrong", was one of the Federation's leading cyberneticists during the 24th century.

Soong was the designer of at least six Soong-type androids: Data, Lore, B-4, and a recreation of his wife Juliana, as well as two prototypes. He was a descendant of 22nd century criminal geneticist Arik Soong, who started work in cybernetics that his descendants, down to Noonian, continued. An associate of Ira Graves, as well as a star scientist of the Federation in his own right, Soong's early work was highly regarded, and he promised breakthroughs on the positronic brain. After failing to deliver on his promises, the disgraced and utterly humiliated Soong disappeared. Traveling under an assumed name to a colony on Omicron Theta, he continued his research, unbeknownst to anyone but his neighbors. (ENT: "The Augments"; TNG: "Datalore", "Inheritance"; Star Trek Nemesis)

While living on Omicron Theta, Soong met and fell in love with Juliana O'Donnell and the pair married in secret on Mavala IV, keeping their relationship secret because Juliana's mother disapproved of her daughter's involvement with a much older man; their intention was to show her later that they could make their relationship work. Together, they perfected his design and built functional androids with advanced artificial intelligence. Each of the androids created by the Soongs represented an advancement and refinement of the potential for their creations. B-4 was a relatively primitive android, capable of only the most basic speech and motorization. Lore, the fourth attempt, displayed tremendous advances in cognitive abilities and interaction but had difficulty in adapting to ethical subroutines designed to facilitate interaction among Humans and was emotionally unstable. For this reason, he had Lore deactivated and began work on his fifth attempt: Data, who was the most successful. Despite lacking emotional ability and requiring a "learning" period, Data advanced further and more quickly than Doctor Soong had originally hoped.

In 2338, when the colony on Omicron Theta came under attack by the Crystalline Entity, Soong escaped, but his wife was fatally injured, and he was assumed dead while in fact he continued his research in secret at a new location. The inert body of Data and the disassembled body of Lore were left behind on the colony, to be discovered later by Starfleet. Soong knew Data had been rescued and followed his life in secret, but assumed that Lore had been left disassembled and inert. Some of the research that he did after the attack involved the creation of an upgrade chip to Data that would, among other things, give him the ability to experience the range of Human emotions previously unavailable to him. Because Soong thought Lore to be still abandoned in pieces on Omicron Theta, he did not research how to correct the flaws in Lore's design or integrate the advancements he later made into Lore, which was his original intention.

Unable to let Juliana go, Noonian transferred his comatose wife's memories into an advanced android body before her passing. The Juliana android, though still a Soong-type design, greatly advanced Soong's goal of replicating Human abilities in an android. The new android design was so advanced that she never realized she was not the original Juliana. When Soong began to become too caught up in his work, she later divorced Soong, moved away, and remarried. In a recorded message, Soong told their "son" Data about his mother and that he had always regretted putting his work before his wife, admitting that the "original" Juliana would have also left him under the circumstances. (TNG: "Inheritance")

Soong was believed to have been killed on Omicron Theta, in the Crystalline Entity's attack, when this massacre was uncovered in 2364. Three years later, however, he was discovered to be alive and secluded in the jungle of Terlina III, where Soong and Juliana had fled after the attack and where he had continued his work to create a perfect emotion chip for his son Data. In an effort to bring Data to him so that he could install the emotion chip, he activated a homing device that forced Data to hijack the USS Enterprise-D in order to travel to Terlina III. Unfortunately, the same homing signal also attracted Lore, who had been re-activated several years before, an event of which Soong was unaware. During this meeting with his "sons", Soong admitted that he would have preferred Data to go into cybernetics like him rather than joining Starfleet, but nevertheless expressed compassion for both his "sons", trying to convince them to reconcile despite the disastrous results of Lore and Data's first meeting, apologizing to Lore for his inability to help Lore during their initial time on the colony in favor of working on Data instead. However, angered at the discovery that he and Data were not actually as different as he had initially believed, with the only difference being Data's greater ability to adapt to the ethical subroutines that Soong had given him, Lore eventually disabled Data in order to receive the emotion chip himself, and after it was installed, attacked Soong, hastening his death. As Soong lay dying, Data assured him that he would remain to continue Soong's legacy, and, although briefly he commented that he would not be able to grieve for his creator, Soong's last words were to assure Data that he would mourn his death in his own way, dying shortly after Data called him "Father" for the first time. (TNG: "Brothers")

Despite Soong's death, this was not the last encounter Data had with his father. Doctor Soong had implanted a subroutine into Data's base programming, enabling Data to dream when he had achieved a certain level of development. The dream circuit was activated prematurely while conducting an experiment with Doctor Julian Bashir from Deep Space 9. Data's dreams included images of a young Noonian Soong as a blacksmith, forging a bird that represented Data himself. Data also encountered a holographic recording of Soong when he met his "mother" for the first time; after he discovered that Juliana was an android "duplicate" of the original, he discovered a memory chip that included a holographic recording of Soong he had created to explain the situation to anyone who learned what Juliana was. When Data activated the recording and identified himself, the Soong hologram admitted that he was grateful that Data was the one to find the message, noting that he had created a special program to explain the history of Data's mother to his "son" in more detail than he would have provided if anyone else had activated the chip. (TNG: "Birthright, Part I", "Inheritance")

According to the time-traveling Berlinghoff Rasmussen, very few records of Doctor Soong's work survived to the 26th century. However, as Rasmussen was actually a con artist from the 22nd century, the veracity of many statements he made was in question. (TNG: "A Matter of Time")

Along with Khan Noonien Singh, Noonian Soong was named after a man named "Kim Noonien Wang", whom Gene Roddenberry had known during World War II. [1] Both names were tied together years later, when it was established on Star Trek: Enterprise that Soong's presumed ancestor Arik Soong (see below) attempted to recreate and perfect the same genetic engineering that had produced Khan. Noonien Soong himself was originally to have had the surname "Wong", in further homage to Roddenberry's acquaintance. 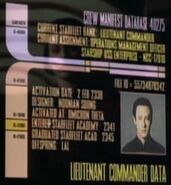 Soong's first name was spelled "Noonien" in the scripts for "Datalore" and "The Measure Of A Man", while all subsequent scripts ("Brothers", "A Matter of Time", "Birthright, Part I", and "Inheritance") spelled the name "Noonian". The okudagram for Data's personnel file seen on-screen in "Conundrum" used "Noonian", while the passenger manifest seen in "Inheritance" used "Noonien". The "Noonien" spelling is used in several reference sources, including the Star Trek Encyclopedia (3rd ed., p. 455) and StarTrek.com. [2]

The first person planned to "portray" Soong was scenic artist Michael Okuda, who – on the suggestion of Producer Robert Justman – was photographed as Soong, to be included in a biographical file seen on a computer readout in "Datalore". However, the scene featuring the bio was scrapped and Okuda's "appearance" never made it on screen. (Star Trek: The Next Generation 365, p. 047)

In "Brothers", Soong was originally planned to be played by actor Keye Luke, who previously appeared as Donald Cory (in TOS: "Whom Gods Destroy"), but Luke, aged eighty-six by this point, was either unavailable or unwilling to do the part. He died only a few months after the broadcast of the episode. (Star Trek: The Next Generation Episode Guide)

Comments by production staff, and the casting of Brent Spiner, indicated that Noonian Soong was the great-grandson of Arik Soong. This was supported by Arik Soong's comment about cybernetics in "The Augments", when he says that developing an artificial lifeform "might take a generation or two."

In Diane Duane's novel Dark Mirror, which takes place in the mirror universe, Doctor Soong was executed as a political dissident, and, consequently, neither Data nor Lore was ever created. A different version of the mirror Soong appeared in the novella "The Worst of Both Worlds". He was assimilated by the Borg in 2371.

In the short story "The Embrace of Cold Architects" by David R. George III (collected in the Star Trek: Myriad Universes anthology Shattered Light), Doctor Soong plays an important role when he is able to save his "granddaughter", Lal, from suffering a cascade failure (which killed her in the main universe) when she follows her "father" to Soong, when he attempts to give Data the emotion chip. In this timeline, her creation was delayed after Data missed a vital conference, resulting in Data constructing Lal several months later than he did in the show.

Doctor Soong returns in the novel Cold Equations: The Persistence of Memory, which reveals that he survived his death by transferring his mind into an android body far more Human in appearance than Data's. After his remaining 'children' – his three early prototypes, B-4, Lal, and Lore – are stolen by the Breen, he manages to rescue them with help from the Enterprise-E, but subsequently sacrifices himself to transfer Data's memories from B-4 into his own body, unable to complete the new body he had been attempting to construct due to a recent Borg invasion and the Breen's subsequent attack on his lab. This transfer results in Data acquiring all of Soong's memories and a new ability to use contractions, although he still chooses not to use them, out of habit.

Retrieved from "https://memory-alpha.fandom.com/wiki/Noonian_Soong?oldid=2487940"
Community content is available under CC-BY-NC unless otherwise noted.