Starfleet ensign; Marla E. Finn; Voyager engineer
Nora Leonhardt (born 31 December) is an actress who worked on the seven year run of Star Trek: The Next Generation and on the first season of Star Trek: Voyager. She was the first unit stand-in for "Deanna Troi" actress Marina Sirtis on all seven seasons and on the Star Trek films Star Trek Generations and Star Trek: First Contact. She also stood-in for several guest actresses and appeared as a background actress on The Next Generation and in Generations. Her only credited role was as Marla E. Finn in the seventh season episode "Eye of the Beholder".

Leonhardt was also scheduled to appear as an Enterprise-D crewmember in a corridor in the fourth season episode "The Mind's Eye" and at the conn in the episode "Redemption" but was replaced by fellow background performers. Leonhardt was absent during the filming of the fifth season episodes "Unification I" til "The Outcast" and was replaced by fellow stand-in Melba Gonzalez.

In 1994 she moved to the production of Voyager where she worked as first unit stand-in for "B'Elanna Torres" actress Roxann Biggs-Dawson on the first season. She also appeared as a background actress in two episodes. Prior to principal filming, she worked as stand-in for Biggs-Dawson during camera and makeup tests on Paramount Stage 8 on Wednesday 10 August 1994.

Other television appearances include featured parts in Silk Stalkings, Valley of the Dolls Encino, and All My Children as well as several stage plays in New York, Los Angeles, and London. More recently, she appeared as Amy Heckerling's assistant in the short musical Not Your Time (2010, with Jason Alexander and James Avery) and in the short comedy Singing in the Park (2011).

Between 1997 and 2019, Leonhardt worked in the real estate industry for Halstead Property, The Corcoran Group, JPMorgan Chase, and Douglas Elliman Real Estate. Since 2019 she has been working as associate professor at Pace University in New York City. 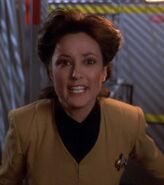 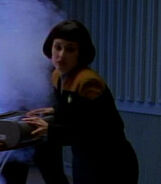