Orion lieutenant
Romulan commander
Norm Prescott (31 January 1927 – 2 July 2005; age 78) was a co-founder of Filmation, and as such was a producer for Star Trek: The Animated Series. For his work on this show, Prescott, along with his production partner Lou Scheimer, won a Daytime Emmy Award in the field of "Outstanding Entertainment Children's Series." Prescott also voiced an Orion lieutenant in the animated episode "The Pirates of Orion" and the Romulan commander in the animated episode "The Practical Joker".

Prescott and Scheimer had produced many popular animated TV programs under the Filmation banner, including The New Adventures of Superman (1966-1970), Fat Albert and the Cosby Kids (1972-1984) and He-Man and the Masters of the Universe (1983-1985). The latter program was turned into a motion picture featuring Star Trek: Voyager's Robert Duncan McNeill and Star Trek: Deep Space Nine guest star Frank Langella.

Under the pseudonym of "Jeff Michael" (actually the names of Prescott's two sons Jeff and Michael), Prescott also co-composed the music for most of Filmation's programs, including Star Trek: The Animated Series. 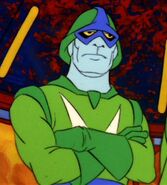