Norman Gibbs (born 1938) is an actor who appeared as regular background operations officer on the first two seasons of Star Trek: Voyager. He received no credit for his appearances but was identified by the call sheets of the episodes. He also appeared as a Kazon-Ogla guard in the second season episode "Initiations".

Gibbs had featured roles in the television drama Disaster on the Coastliner (1979, with Lloyd Bridges, William Shatner, Michael Pataki, and Jerry Ayres) and in episodes of The Bionic Woman (1977, with Whit Bissell), Salvage 1 (1979, with Paul Sorensen), Trapper John, M.D. (1979), and Palmerstown, U.S.A. (1980, with Don Keefer and John Schuck) before he had the memorable part of the first Jive dude in the comedy Airplane! (1980, with Lloyd Bridges, Jonathan Banks, Marcy Goldman, Gregory Itzin, Cyril O'Reilly, Kenneth Tobey, Jason Wingreen, Sandra Lee Gimpel, Leslie Hoffman, and Paula Moody). 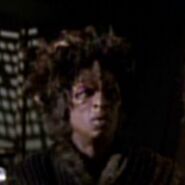 Retrieved from "https://memory-alpha.fandom.com/wiki/Norman_Gibbs?oldid=2485249"
Community content is available under CC-BY-NC unless otherwise noted.