The Nyrian biosphere vessel, also described as a habitat vessel, was a vast starship utilized by the Nyrians of the Delta Quadrant. It contained at least four decks, and corridors containing control terminals, and at least one more extensive control center (or what appeared like it).

The ship was equipped with a translocator and acted as the prison in which the Nyrians might keep the crews of ships, space stations, and colonies that they had acquired.

The ship contained 94 habitats, speculated to possibly be holographic in nature, containing thousands of prisoners. The habitats appeared to be tailored to make the stay of the prisoners as comfortable as possible. Habitats could be entered from the main body of the ship via hidden portals. These portals also linked one habitat to another.

The crew of the USS Voyager found themselves imprisoned on the ship in late 2373, only to quickly escape and take control. After translocating several high ranking Nyrians into the Argala habitat, which was very cold by their species norms, they managed to arrange for all prisoners to be taken home. They also planned to disable the translocator. (VOY: "Displaced") 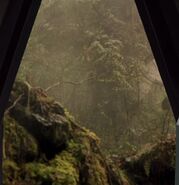 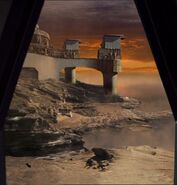