Odan was a Trill symbiont in the 24th century. Odan was an accomplished ambassador for the United Federation of Planets and as of 2367 had been joined to at least three Trill hosts including, briefly, with a Human. (TNG: "The Host")

In 2337, Odan was joined with a male host. In this year, he mediated a dispute between the Alphans and Betans of the Pelians, whose governments had been in a rocky relationship since their moons were colonized. He worked with Lathal Bine's aunt and Kalin Trose.

In 2367, Odan had joined with a different male host and maintained that he was the previous host's son. He was tapped again to mediate a dispute with the Pelians when the Alphans developed an energy source which disadvantaged the Betans. The Federation sent the USS Enterprise-D to assist. It was hoped that he would be able to accomplish the same results this time and prevent a war between the two. During his efforts Odan refused transport to the surface and insisted on traveling by shuttlecraft. This led to an attack during which the host body was injured, necessitating the removal of Odan.

Odan could not survive more than a few hours outside of a host. A Trill transport was within range and with a suitable host aboard but the Enterprise could not leave Peliar Zel, and the transport was forty hours away. To extend the life of the symbiont, William T. Riker volunteered to become a temporary host. Odan was transferred to his body successfully, although he then had to spend some time convincing the moons' ambassadors that he was still Odan despite his new appearance before negotiations could continue.

Ultimately Odan was successful in averting a war, but barely in time to prevent permanent harm to the incompatible body of its host, Riker; even before he was extracted, Odan rejected the offer of further immunosuppressants despite the damage he was suffering in Riker because the drugs would have damaged Riker's body. With negotiations complete Odan was removed and joined to become Kareel Odan.

The transfer of Odan had enormous repercussions. The two factions in the negotiations were initially skeptical of the explanation for Odan's change in appearance and negotiations almost never happened. At the same time, Odan and Doctor Beverly Crusher had begun a relationship prior to his host's injuries. The change in appearance proved professionally and personally difficult for Dr. Crusher; although she had a romantic encounter with Odan while the symbiont was in Riker's body, she broke it off after Odan was transferred into Kareel, as it was too complicated to be involved with someone when they could change bodies so easily.

Both of these reactions can be primarily attributed to the fact that the joined nature of the Trill was not widely known at the time. However, the extremely public and open display of such a surprising secret soon made the joined society of Trill common knowledge. (TNG: "The Host") 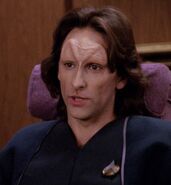 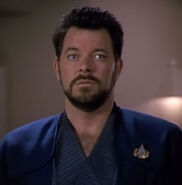 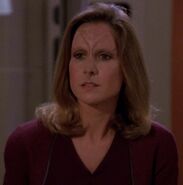 In contrast to the Trill later shown in Star Trek, where the host and the symbiont appear to share consciousnesses, Odan appeared to exert more control over his hosts, as he regularly referred to Riker as a body without any real sign that Riker himself had much impact on Odan's mannerisms or thoughts. However, this could be accounted for by the fact that Riker is the only Human seen being used as a host for a symbiont, creating the possibility that Odan had to suppress Riker's personality more than he would have done in a Trill host in order to gain the necessary control to complete his mission.

The difference between this symbiont and ones shown later was explained in the non-canon novel Forged in Fire, which explained that the ridged Trill such as Odan's hosts were the result of a strain of the Klingon augment virus that managed to infect a Trill colony through visiting Klingon traders. However, the Trill seemed not to be interested in working on methods of restoring the original Trill look, with this 'sub-group' having recently, at the time the novel was set, been re-accepted back into Trill society. The novel also revealed that Odan's disinclination to use transporters was simply part of a Trill policy to keep the symbiont's existence secret as the transporter scans would have picked it up; presumably, after the public events of the negotiations Odan participated in while in Riker's body, this policy became less relevant, hence accounting for the ease with which Jadzia Dax transported.

An earlier host of the Odan symbiont appears in Kristine Kathryn Rusch and Jill Sherwin's The Lives of Dax short story "First Steps".

Crusher encountered Kareel Odan again in the comics story "A House Divided", when she acts as an advisor on the Enterprise-D as it is transporting a Trill master criminal to a new, high-security prison.