Starbase 46 was located near Organia. (DIS: "Despite Yourself")

In the mid-23rd century, this planet was located near the Federation-Klingon border. (TOS: "Errand of Mercy")

In 2293, the location of Organia in the Milky Way Galaxy was labeled in the star chart "The Explored Galaxy", which was on display in Captain James T. Kirk's quarters aboard the USS Enterprise-A. (Star Trek VI: The Undiscovered Country okudagram)

In 2371, the location of Organia was labeled in a star chart Data and Picard studied in stellar cartography aboard the USS Enterprise-D. (Star Trek Generations okudagram)

In 2376, the location of Organia was labeled on a star chart in astrometrics on the USS Voyager. (VOY: "Child's Play" okudagram)

In 2256, during the first Federation-Klingon War, the Organia system was occupied by the Klingons. This occupation lasted at least into the next year. (DIS: "Magic to Make the Sanest Man Go Mad", "The War Without, The War Within")

In the alternate reality, in the 2250s, Organia was a flashpoint between Federation and Klingon forces. In 2259, Starfleet was tracking the movement of Organian representatives in the San Francisco Metropolitan Area. Their current position was IDed by a label superimposed on a map of the area. This map was seen on a powerwall in the office of Christopher Pike at Starfleet Headquarters. (Star Trek Into Darkness)

In 2267, Organia was the only class M planet located in the disputed region of space between the Federation and Klingon Empire. Due to its strategic location, Organia became the focal point of the second Federation-Klingon War, which eventually led to its invasion by the Klingons, led by Commander Governor Kor. (TOS: "Errand of Mercy")

In 2370, Organia was listed on the Deep Space 9 arrival roster as the point of departure for the GS 12. (DS9: "Whispers" okudagram)

In 2372, Worf told Kor that the latter's confrontation with James T. Kirk on Organia was one of many stories about Kor he had heard since he was a child. (DS9: "The Sword of Kahless")

The location of Organia on "The Explored Galaxy" star chart 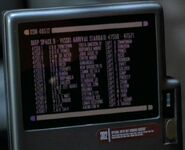 In a story treatment for the unproduced film Star Trek: Planet of the Titans, writer Philip Kaufman considered destroying Organia in that film.

In ultimately unused dialogue from the final draft script of ENT: "Observer Effect", Organia was described as being located far from Starfleet space as of 2154, and an Organian speculated that, at their present rate of exploration, Humans and Klingons would reach the planet in approximately a century.

The map of the San Francisco Metropolitan Area and the news ticker mentioning the Treaty of Organia can be seen in the video "Star Trek: Into Darkness" – User Interface VFX at vimeo.com. [1]

According to Star Trek: Star Charts (pp. 54, 57 & 64) and Stellar Cartography: The Starfleet Reference Library ("Stellar Cartography", p. 28, 30; "Federation Historical Highlights, 2161-2385"), Organia (Organia IV) was a quarantined planet in the late 24th century. The planet had no capital city, and the dominant species were the noncorporeal Organians. Not much was known to the Federation about the population, the official government, and if the Organians had become warp-capable and, if so, when. According to a map of the Klingon Empire – prepared by the Scribe K'Tark for the Klingon High Council in the Year of Kahless 893 (2266) – Organia was identified as a Klingon system. This claim was propagandistic, as the Empire claimed many border systems. This often put the Empire at odds with the Federation.

According to Star Trek Maps (chart D), Organia had a moon called "Sais".