The following is a list of unnamed holograms from the Orient Express program.

The businessman was a character who appeared in the Orient Express train when the Enterprise-D was creating an emergent lifeform. Various characters in the merged program represented the systems of the Enterprise. He was reading a newspaper, perhaps representing the ship's database. (TNG: "Emergence")

The businessman was played by background actor Dennis Tracy, Patrick Stewart's longtime stand-in, who received no credit for his appearance.

The conductor was a holodeck character presumably from the original Orient Express program. When an emergent lifeform was trying to find vertion particles to sustain itself, various characters in this program represented the nodes in different systems of the USS Enterprise-D. The conductor seemed to be the warp engines and guidance system. He agreed to allow the personnel of the Enterprise-D to help him find New Vertiform City so the lifeform could get the vertion particles. (TNG: "Emergence")

The conductor was played by David Huddleston.

The engineer was a holographic character presumably from the original Orient Express program, much favored by Beverly Crusher. When the Enterprise-D was generating an emergent lifeform in 2370, this character interacted directly with the ship's engine systems and appeared to represent the Enterprise-D's navigation system. When Data and Riker visited the holodeck to determine what was happening and why the ships systems were acting erratically, they were confronted by the conductor. The engineer attempted to defend the Enterprise-D crew, and told them that the other characters were hijacking the train. He was killed by another character called the hitman. (TNG: "Emergence")

The engineer was played by Thomas Kopache, a regular Star Trek guest actor.

The flappers were holographic characters possibly from the original Orient Express program. When the Enterprise-D was generating an emergent lifeform, they were working on a jigsaw puzzle which represented the lifeform. It is possible they represented the merged replicator and transporter systems constructing the lifeform in the cargo bay. (TNG: "Emergence")

Dianne Zanuck auditioned for the part and had to dance like a flapper. She then filmed her scenes in three days.
According to the
Star Trek Encyclopedia (4th ed., vol. 2, p. 112), one of the flappers was played by D. Michaels. 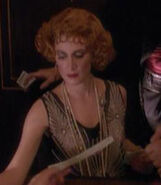 Played by Reed
Add an image to this gallery

The gunslinger was a holographic character that appeared on the Orient Express as the systems of the Enterprise-D were forming a new lifeform. He had a piece of a puzzle that the Flappers were working on. The puzzle was a representation of the lifeform. It was theorized, he represented the nodes of the weapons systems of the Enterprise-D. He played cards with the hitman, although he was tied up. (TNG: "Emergence")

The gunslinger was played by background actor Steve Whittaker who received no credit for his appearance.

The hayseed was a holographic farmer who appeared on the Orient Express, when an emergent life-force was trying to find vertion particles to sustain itself. When Data and Troi visited the holodeck to determine what was happening, they found the hayseed playing with a jigsaw puzzle that represented the lifeform. He did not know what he was making, but told Troi that he was on his way to New Vertiform City. When asked about the city, he said that there was a great restaurant to eat at. This was in reference for the lifeform's need to obtain vertion particles to sustain itself, and possibly pointing out this character represented the nodes in the tractor beam system used to collect the vertion particles. (TNG: "Emergence")

The hayseed was played by Arlee Reed.

The hitman was a major character who appeared on the Orient Express. His part was that of a stereotypical gangster: sinister, brutal, yet smartly dressed and polite.

When the holodeck became a focal point in the birth process of a new lifeform in 2370, the hitman impersonated a threat to the Enterprise-D officers. With the holodeck safety protocol disabled, his sidearm could have proven deadly, as deadly as it had been to the holographic character of the engineer. As the program progressed, it became evident that it was the hitman's task to protect the early phases of the emergent lifeform's generation. Having completed this task by "laying the foundation" in a symbolic act at Keystone City, he exited from the scene. Later, he continued to be suspicious to Data and the crew during their attempt to reach a closer source of vertion particles. (TNG: "Emergence")

The hitman was played by actor Vinny Argiro.

The knight in armor was a character representing the Enterprise-D shields, who appeared on the Orient Express when the Enterprise-D was creating an emergent lifeform in 2370. (TNG: "Emergence")

The knight was played by background actor Christopher Gilman who received no credit for his appearance.

The taxi driver was a character who appeared in Keystone City, when an emergent lifeform was being created by the systems of the Enterprise-D. He attempted to run over Data, as he was trying to access the ship's systems. Data held the taxi back with one hand as he used his other hand to depolarize the system. (TNG: "Emergence")

The taxi driver was played by stunt actor Nick Dimitri who received no credit for his appearance.
Retrieved from "https://memory-alpha.fandom.com/wiki/Orient_Express_holograms?oldid=2363856"
Community content is available under CC-BY-NC unless otherwise noted.