Orion was a stellar constellation visible from Earth. The asterism Orion's Belt was located in this constellation.

In 1930, James T. Kirk once pointed out the star Alnitak in Orion's belt in the night sky to Edith Keeler. (TOS: "The City on the Edge of Forever")

The Orion Constellation was partially visible on a viewscreen in the briefing room on the USS Enterprise in 2266. It was a star chart of the winter sky as seen from Earth. The constellation Orion was visible in the upper left corner of the chart and identified by name. (TOS: "The Corbomite Maneuver")

In 2367, René Picard could view the Orion constellation from his home in La Barre, France. (TNG: "Family")

In 2371, while being questioned by a welcoming admiral shortly after her first arrival on USS Voyager, Janeway mentioned Gamma Orionis. (VOY: "Relativity")

In 2375, a picture of the Orion Nebula was on display in astrometrics aboard the Voyager. (VOY: "Night") 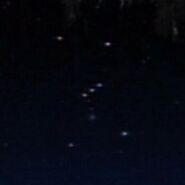 The constellation of Orion

Orion Nebula
Add an image to this gallery

Retrieved from "https://memory-alpha.fandom.com/wiki/Orion_(constellation)?oldid=2254428"
Community content is available under CC-BY-NC unless otherwise noted.