Outpost 4 was an outpost constructed a mile deep on an asteroid of almost solid iron by Starfleet in 2160. The outpost's protective shield was made of cast rodinium. This outpost was one of seven Earth Outpost Stations located in Sector Z-6 on the Federation side of the Romulan Neutral Zone.

In 2266, Outpost 4 came under attack by an unknown starship that was later discovered to be Romulan Bird-of-Prey. Although protected by full deflectors, the outpost was hit by a powerful high-energy plasma torpedo that completely blew out the outpost's deflector shield, as well as taking out its phasers and killing its weapons crew. The second attack by the plasma torpedo hit the outpost, unprotected, resulting in the base's disintegration.

During the Neutral Zone Incursion, the location of Outpost 4 was labeled on a map of Sector Z-6 that was displayed on the bridge viewscreen of the USS Enterprise. (TOS: "Balance of Terror", production art)

Between 2266 and 2366, this outpost had been rebuilt. The location of the new Outpost 4 was labeled on a tactical intelligence analysis star chart. This outpost received a warning from Starfleet Command about an alleged Romulan base on Nelvana III. (TNG: "The Defector", okudagram)

Commander Hansen transmits his report of the attack from Outpost 4 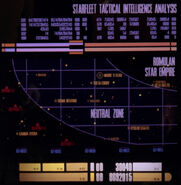 The location of Outpost 4, 2366
Add an image to this gallery

According to Star Trek: Star Charts (p. 66) and Stellar Cartography: The Starfleet Reference Library ("Federation Historical Highlights, 2161-2385"), Outpost 4 was located in the Beta Quadrant. In the Star Trek: Star Charts (p. 66), the location of 23 Earth outposts were depicted on a map of the Beta Quadrant. Outposts 1 to 8 were mentioned in dialogue or were seen on the Z-6 Sector map in "Balance of Terror" and Outpost 23 was mentioned in dialogue in "Future Imperfect". Outpost 4 was constructed in an area of space that been contested over during the Romulan War Theater of Operations (2156-2160).

The October spread of the Star Trek: Ships of the Line (2017) calendar titled "Duel of the Flagships" depicted the Enterprise and a Romulan Bird-of-Prey in battle over Outpost 4, by D.M. Phoenix.

Retrieved from "https://memory-alpha.fandom.com/wiki/Outpost_4?oldid=2506684"
Community content is available under CC-BY-NC unless otherwise noted.