Star Trek: Picard - Season One is a three-disc Blu-ray release featuring the complete first season of Star Trek: Picard. The release came packaged in a Viva Elite case within a slipcover. A Limited Steelbook® was concurrently released with the the standard release in both regions A and B. 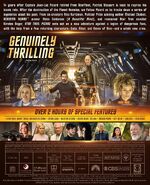 While in some cases still being marketed as region-restricted, the releases are in actuality region-free as this has increasingly become commonplace for the Blu-ray format – also explaining the unified inclusion of subtitles and dubbed language audio tracks for all regions.