The PWB Preceptor was a Romulan warship that was in service with the Romulan military in the late 24th century. Preceptor fought in the Dominion War.

In 2375, the Preceptor reported numerous crew casualties, which were displayed on a casualty report displayed aboard Deep Space 9. (DS9: "Image in the Sand", "The Siege of AR-558")

The casualty report carried an identification number of 543456. 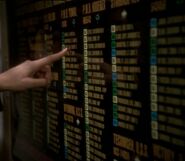 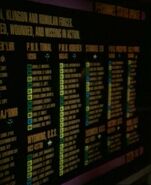 Display featuring Preceptor casualties
Add an image to this gallery
Retrieved from "https://memory-alpha.fandom.com/wiki/PWB_Preceptor?oldid=1324019"
Community content is available under CC-BY-NC unless otherwise noted.