A palm beacon was a flashlight-like device held in the palm of the hand, often used by away teams in dark areas. (TNG: "Booby Trap"; Star Trek Generations)

Palm beacons were used when away teams beamed down to the dark and foggy planet Tarchannen III. Susanna Leijten later advised turning off the beacons as the light was frightening the Tarchannen III species. (TNG: "Identity Crisis")

In 2368, Data modified a palm beacon to emit an optical burst pattern that would counteract the effects of the Ktarian game. (TNG: "The Game")

In 2369, Neela and Miles O'Brien used a palm beacon while searching for tritanium traces in a deactivated power conduit. (DS9: "In the Hands of the Prophets") 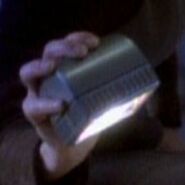 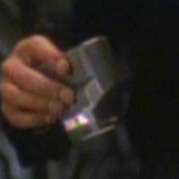 In 2370, Data and Captain Jean-Luc Picard used palm beacons after returning to an unmanned and non-functioning Enterprise after their three day search for a stray torpedo to discover that the Enterprise crew had de-evolved into various animistic creatures. (TNG: "Genesis")

Retrieved from "https://memory-alpha.fandom.com/wiki/Palm_beacon?oldid=2408257"
Community content is available under CC-BY-NC unless otherwise noted.