Until 2007, it distributed all home video products of Star Trek films and television shows. It was founded in 1976 as "Paramount Home Video". One of its first presidents had been Mel Harris, who went on to play a major part in the history of the Star Trek franchise.

The UK division of PHE was responsible for Star Trek VHS releases in the UK from 1999 to 2002, and DVD releases from 2002 onward. PHE took over distribution from CIC Video, who were merged into PHE following the end of the joint venture with Universal Pictures.

VHS releases included the final three seasons of TNG re-releases (seasons 3-5) in three-episodes-per-tape format, as well as DS9 volume 7.13, VOY Season 6 and 7, and the first season of Enterprise.

Paramount Home Video logo from 1979 (a modified version of the logo intended for the Paramount Television Service, intended to be anchored by the scrapped Star Trek: Phase II) 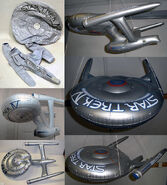 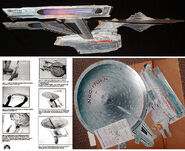