View source
watch 24:28
Star Trek Timeline [INTERACTIVE]
Do you like this video?
Play Sound
"It's a perfect match. We're the brains and you're the brawn."
– Tryla Scott, 2364 ("Conspiracy")

The mysterious race of "parasitic beings" and their "mother creature", recognized as an intelligent alien non-humanoid parasitic lifeform, was first discovered by the United Federation of Planets during the mid-2360s. Though the true origins of these lifeforms was specifically unknown, it was determined that they originated from an unexplored sector of the Milky Way Galaxy.

Though stating, "We mean you no harm. We seek peaceful co-existence," the actions of these aggressive parasites said otherwise, as they had the ability to invade and control humanoid species, notably Humans and Vulcans. (TNG: "Conspiracy")

Overall, these parasites viewed themselves as superior lifeforms to humanoids, noting that "patience is one of our virtues." They also stated that they in fact appreciated drama, and shared that when compared to Humans, "one thing both races share is a love of theater."

The appearance of these "parasitic beings" resembled that of common crawling insects. The body was approximately twelve centimeters in length and light purple in color. The arrangement of the extremities, from anterior to posterior, were two pincers, six legs, and a blue gill.

When invading the host-victim, the parasitic being's gill protruded from the victim's skin at the base of the neck allowing it to breathe. This was the only identifiable physical attribute shown by the parasite through its host.

While inside the host body, the "parasitic being" took complete control over all brain functions by placing its tendrils around the victim's brain stem. Their tendril placement also stimulated the victim's adrenal glands, which allowed the parasite to generate megastrength for the host-victim, while also allowing much greater resistance to otherwise normal physical harm.

During a physical altercation between two Humans and a Klingon, it was claimed by the host-victim that he "could snap your neck in a second, but that wouldn't be as much fun," while one of his opponents described how, "he picked me up like a rag doll." This host-victim experienced little effect to a phaser set on "stun", while one set on "kill" was required to effectively immobilize the host being.

When hosted, the single weakness of the host that was identified was the "lack of memory," forcing them to speak through their victims "by bluffing their way through talks of old times."

Once integrated, the parasite could not be removed by means of surgery without killing the patient. Though it was unknown how they entered the host's body, it was known that when a host was incapacitated, the invading parasite evacuated through the host's mouth and returned to the host of the "mother creature." 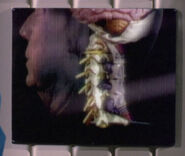 A being attached to Gregory Quinn

The "mother creature" was much larger in size, appearing over half a meter tall, and was capable of making audible roars.

It too was capable of living within a humanoid host, along with dozens of progeny "parasitic beings" coexisting throughout the body, while the "mother creature" itself inhabited the host's lower body cavity.

The death of the "mother creature" meant the inability for its progeny to continue to survive. (TNG: "Conspiracy")

"We've been moving slowly, cautiously, for many months now. Careful to cover our tracks. Careful not to arouse suspicion, until it's too late."
– Savar, 2364 ("Conspiracy")

The Federation first discovered the creatures on a distant uncharted planet during a survey mission.

Over a period of approximately six months ending in late 2364, these lifeforms had infiltrated the Federation's Starfleet Command, even high-ranking admirals within the organization.

Admiral Quinn suspected that something was wrong at the highest levels of Starfleet Command in mid-2364. Seeking allies he could trust, he ordered Lieutenant Commander Remmick to investigate Captain Jean-Luc Picard to determine his trustworthiness. Remmick's investigation found that, despite a sense of over-familiarity among the USS Enterprise-D's bridge crew, Picard was above reproach. Quinn told Picard of his suspicions and that he wanted to promote Picard to admiral, and make him Commandant of Starfleet Academy, so he could be nearby. Picard turned down the offer, believing he could serve Quinn better by remaining as captain of the Enterprise. (TNG: "Coming of Age") Other high-ranking officers had their own suspicions. Admiral Norah Satie was also instrumental in discovering the conspiracy. (TNG: "The Drumhead")

Captains Walker Keel, Rixx, and Tryla Scott noticed a pattern of unusual orders and activity coming from Starfleet Command. Officers they had known for years were, in Keel's words, suddenly "bluffing their way through talk of old times," Starbase 12 was mysteriously evacuated for two days without explanation and Onna Karapleedeez, Ryan Sipe, and McKinney had all died under mysterious circumstances.

Quinn and Scott eventually fell victim to the parasites, both becoming hosts, while Remmick became the unwilling host to the parasites' "mother creature." Several other officers were infected and either kept at Starfleet Headquarters or transferred to starbases to increase the creatures' influence.

Captains Keel and Rixx were unaware of this and called Picard to a meeting on Dytallix B via a Code 47 signal. They warned Picard of the threat, and to watch his back. Soon after, Keel's ship, the USS Horatio, was destroyed with Keel aboard. This incident, and evidence of a pattern in Starfleet's unusual orders found by Lieutenant Commander Data, led Picard to order the Enterprise to Earth to confront Starfleet Command directly.

On Earth, Quinn boarded the Enterprise, and, while Picard was on the surface with Aaron and Savar, Quinn attempted to implant Dr. Beverly Crusher with one of the parasites. Instead, Commander William T. Riker caught Quinn's attention first, and Quinn attempted to infect him instead. Riker attempted to fight him off, but was easily overpowered, as were Worf and Geordi La Forge. He was only subdued when Dr. Crusher shot him repeatedly with a phaser set to kill.

Having subdued Admirals Savar and Aaron and Captain Scott, Picard and Riker tracked one of the parasites to a room where Dexter Remmick, inhabited by the "mother creature", was discovered transmitting a message. The creature – communicating through Remmick – said its race seeks "peaceful coexistence," contrary to the death count they had amassed to that point.

Both Remmick and the "mother creature" were killed by combined phaser fire at the hands of Picard and Riker, which caused the deaths of all the other parasites on Earth. Admiral Quinn made a full recovery.

The "mother creature" had sent a signal into deep space, which Data identified as a beacon, indicating that their return would only be a matter of time. (TNG: "Conspiracy")

The "parasitic being," as it was called by Dr. Crusher, was described in the final draft of the script as "looking something like an oversized silverfish." Later in the script it was also described as a "strange insect-like animal."

The "mother creature," as it was called by Captain Picard, was described in the final draft of the script as being "dull yellow – looking like a cross between a parasite and a Human fetus." It was also described as a "fetus-creature."

The Star Trek Chronology (2nd ed., p. 290) noted: "Although Picard and company were successful in eradicating them, the parasites did send a mysterious radio signal, presumably to others of their kind. At the time the episode was written, this was apparently intended to lead to the introduction of the Borg in Star Trek: The Next Generation's second season. The Borg connection was dropped before "Q Who" (TNG) was written, and the truth about the parasites remains a mystery."

The Art of Star Trek (p. 104) stated that although the parasites were "tame in comparison to Alien, this type of story was not typical of what viewers had come to expect of STAR TREK, and was not followed up."

These parasites were designed by Andrew Probert. In his concept designs, dated 4 March 1988, the "mama bug" originally had a head with pincers appearing more reminiscent of the smaller parasites.

The "mother creature" studio model was later built by Makeup & Effects Laboratories, a company headed by Allan A. Apone, following a design by Rick Sternbach. (Star Trek: The Next Generation 365, p. 111)

The puppet was operated by prop master Alan Sims.

The soft-wire armature prop used within the stop motion puppet of the "parasitic beings" was made by the Starlight Effects shop, and measures 4.5 inches in length. (Per Roger Sides eBay listing for prop.)

The parasites reappear in the comic book series The Broken Moon!, when Geordi La Forge thwarts their attempt to take over the Onglaatu (β).

In the Deep Space Nine relaunch series of novels, the short story "Sins of the Mother", from the anthology The Lives of Dax, revealed that the neural parasites were discovered on a comet near Trill, by then-head of the Trill Symbiosis Commission Audrid Dax, whose husband was a victim of a parasite. The Trill authorities classified the knowledge and never released it to the public.

Mission Gamma, and the conclusion Unity, had the neural parasites return in 2376, following the end of the Dominion War. Shakaar Edon was one of those infiltrated and was assassinated by a Trill delegate to Bajor's entering of the Federation.

In Unjoined, it was revealed that the neural parasites were genetically created from Trill symbionts in an ancient Trill colony on Kurl; these symbionts were designed to be removed without killing the host and were passed from Trill to Trill. The colony was annihilated by the regular Trill when it was discovered that the fatal combination of a mutated virus and genetic engineering caused the symbionts to go mad.

The neural parasites most recently appeared in the roleplaying scenario Star Trek Adventures - A Star Beyond the Stars where they attempted to infiltrate the Romulan Star Empire.

The CCG: All Good Things expansion for the Star Trek Customizable Card Game gives their species name as "Bluegill".

The mission "Uneasy Allies" establishes that Trill physiology was very resistant against the parasites, giving them a much better chance at surviving possession. Joined Trills were said to be immune thanks to their symbiont.