Pardshay's species was a humanoid species widely dispersed throughout the Alpha, Beta, and Delta Quadrants.

They acquired interstellar travel sometime before the mid-21st century, and were already present among the traders on Rigel X by 2151. (ENT: "Broken Bow")

By the late 23rd century, members of the species began enlisting in Starfleet, with one serving on the USS Excelsior in 2293. (Star Trek VI: The Undiscovered Country; VOY: "Flashback")

In the 24th century, they were often found in the seedier parts of the Federation and Cardassian frontiers, with members present at the Bonestell Recreation Facility at Starbase Earhart in 2327 (TNG: "Tapestry"), a bar on Torman V in 2369 (TNG: "Chain of Command, Part I") and frequently aboard Deep Space 9, following the Cardassian withdraw from Bajor the same year. (DS9: "Babel", et al.)

In 2371, a member worked for the Petarians serving about their freighter Xhosa, under the Human Captain Kasidy Yates. (DS9: "Family Business", "Indiscretion")

During the Federation-Klingon War, another member of the species worked as a medic on Ajilon Prime in 2373. (DS9: "Nor the Battle to the Strong") The same year, a seemingly disfigured member of this species was a customer of Quark's, during his short lived career as an arms dealer. The customer tested and proceeded to purchase 2,000 Breen CRM 114s for his part in whatever conflict he was involved. (DS9: "Business as Usual")

Their presence in the Delta Quadrant was also seen on numerous occasions, during indirect contacts made during USS Voyager's return trip to Earth during the 2370s. (VOY: "Concerning Flight", et al.)

This unidentified species is named on Memory Alpha after the only named character of this species, Pardshay, who appeared in the DS9 Season 3 episode "Family Business". This alien design first appeared in the 1991 production Star Trek VI: The Undiscovered Country.

Though described as a new design by Michael Westmore, evidence of elements taken from previous aliens, like the Promellians (from TNG Season 2) and the Algolians (from TNG Season 3), are visually evident in this make-up design. Further refinements, especially to the nose and neck, continued to be made showing a fair amount of variation in this species, including the appearance of another offshoot look for what Memory Alpha identifies as Yint's species. 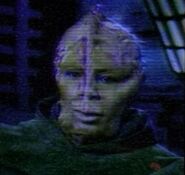 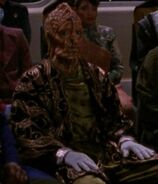 Weapon's buyer with a disfigured face

Yint's species
Add an image to this gallery

When revealing some of his new creations for DS9 Season 1, Westmore explained "I created a bald orange creature with a turkey throat and a spoon nose, called a Rotciv, just to walk down the Promenade. Then we put him in the bar on Star Trek: The Next Generation." (Cinefantastique, Vol. 23, No. 6, p. 31)

It was later explained that for "Chain of Command, Part I", "the lavender-faced alien Westmore dubbed "Rotciv" [was] a palindrome of the Algolian chimes musician from Season 4 dubbed "Victor" ("Ménage à Troi") after the extra who [was] under both masks, Victor Sein." (Star Trek: The Next Generation Companion, p. 229)

The name "Rotvic" also appeared on call sheets of ENT: "Broken Bow" to describe an alien appearing in that episode.

Retrieved from "https://memory-alpha.fandom.com/wiki/Pardshay%27s_species?oldid=2408309"
Community content is available under CC-BY-NC unless otherwise noted.