Patrick Kilpatrick (born 20 August 1949; age 72) is an actor who has guest-starred on one episode of Star Trek: Deep Space Nine and two episodes of Star Trek: Voyager. All three of his appearances on Star Trek were directed by Winrich Kolbe.

Kilpatrick made his motion picture debut in the quirky science fiction cult classic The Toxic Avenger in 1985. That same year, he co-starred with future Voyager actress Kate Mulgrew and Star Trek: The Original Series/Star Trek: The Next Generation guest star Michael Pataki in Remo Williams: The Adventure Begins.

In 1990, he appeared in the action film Death Warrant, with DS9 actor Armin Shimerman. In 1993, he had a role in another action film, Best of the Best 2, with Meg Foster and Nicholas Worth, and an appearance as the main villain of an episode of the science fiction series Time Trax, which also guest-starred Jeffrey Nordling. He then went on to appear in 1995's 3 Ninjas Knuckle Up. Also featured in this film were Michael Hungerford, Charles Napier, Nick Ramus, Vincent Schiavelli and Sheldon Peters Wolfchild. Also in 1995, he appeared in Under Siege 2: Dark Territory, along with Jonathan Banks, Brenda Bakke, and Kurtwood Smith.

He also appeared in the 1996 action film Eraser, starring Vanessa Williams and James Cromwell. That same year, he, Tiny Ron, and Ken Jenkins all appeared in the gangster film Last Man Standing. Most recently, however, he and Star Trek: First Contact's Neal McDonough co-starred together as Pre-Crime officers in the 2002 science fiction hit Minority Report. George D. Wallace also appeared in this film.

During the 1989-1990 season, Kilpatrick was a regular cast member of the TV series Tour of Duty, as was TNG guest actor Dan Gauthier. He was also a regular on the TV series Dr. Quinn, Medicine Woman during the 1996-97 season. That series also starred Barbara Babcock, Chad Allen, Joe Lando, and Erika Flores. He also made an appearance in the fourth season finale of 24 along with Gregory Itzin, Roger Cross, Glenn Morshower, and Jude Ciccolella. 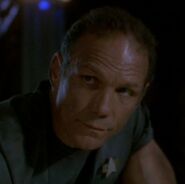