A pattern enhancer, also known as a transporter / transport enhancer, was a piece of portable equipment that boosted the signal of the transporter in conditions where a signal was otherwise difficult to maintain.

Even transporter enhancers weren't sufficient to overcome a polarized ionization field to attain a transporter lock. (DS9: "Heart of Stone")

In the 23rd century, Starfleet pattern enhancers featured a component at the top that spun to deploy an antennae-dish to signify a transport enhancement field was online. (DIS: "Brother")

By the late 24th century, pattern enhancers were about one meter in height, composed of four sections: a trio of legs which were encased within the body while not in use, highly-polished silver-colored main body casing, a black control cuff, and roughly conical top which glowed when activated and in-use.

Used in sets of three, the enhancers were set up in a triangular formation, approximately one-to-seven meters apart. First the legs were extended by means of a switch on the main body, enabling steady placement regardless of terrain. Second, the conical top and the attached control cuff of the device were rotated approximately 70-90° clockwise; once the top was lit, the enhancer was active. (TNG: "Power Play")

A miniature version with the same basic structure was also in use in the early 2370s. (VOY: "Friendship One") 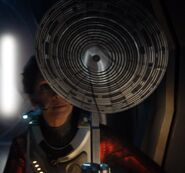 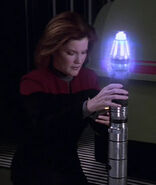 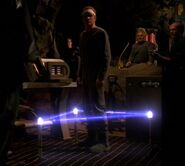 Joe Carey sets up a set of miniature enhancers (2370s)

In 2257, a cloud of charged particles disrupted the transporter signal to investigate the crashed USS Hiawatha. The away team resorted to landing pods to get to the ship, and brought transporter enhancers to get back. (DIS: "Brother")

In 2263 of the alternate reality, Montgomery Scott came up with the idea of modifying pulse beacons from the USS Franklin to act as pattern enhancers to enable an away team to beam the trapped crew of the USS Enterprise out of Krall's base. These makeshift pattern enhancers successfully enabled Scott and Pavel Chekov to beam the Enterprise crewmembers, twenty at a time, to the Franklin. (Star Trek Beyond)

Responding to a distress call in 2368, the USS Enterprise-D shuttle Campbell crashed on Mab-Bu VI. EM bursts prevented a stable transporter lock on the away team, but Transporter chief Miles O'Brien volunteered to beam down with a set of pattern enhancers. Set seven meters apart, the enhancers allowed Enterprise to retrieve the team. (TNG: "Power Play")

In 2369, while Professor James Moriarty trapped Captain Jean-Luc Picard, Lt. Commander Data and Lieutenant Reginald Barclay on the Enterprise holodeck, in a scheme to escape the confines of the holodeck, Barclay set up transporter enhancers within the Sherlock Holmes simulation in an effort to "enhance the molecular pattern of [a] chair... so the transporter can get a better lock on the signal." (TNG: "Ship in a Bottle")

Later that year, in a neurosomatic-induced hallucination on Tilonus IV, Commander Riker imagined Worf and Data had come to rescue him and set up pattern enhancers to escape. (TNG: "Frame of Mind")

Investigating unusual activity on Devidia II, pattern enhancers were used in conjunction with phase conditioners and phase discriminators to adjust the phase of Captain Picard, Riker, Troi, La Forge, and Crusher so they could see the Devidians. (TNG: "Time's Arrow")

In 2370, Data set up pattern enhancers on Atrea IV to allow himself and Juliana Tainer to beam back to the Enterprise, though the enhancers were destroyed in a cave-in. (TNG: "Inheritance")

Lt. Commander Jadzia Dax brought a set of miniature pattern enhancers on a mission to L-S VI, and used them to beam a pillar to the runabout to bring back to Deep Space 9. (DS9: "The Alternate")

In 2371, while attempting to rescue an apparently trapped Major Kira Nerys, Odo asked the computer if using pattern enhancers would allow the runabout to lock onto her signal, but the moon's polarized ionization field made it impossible. (DS9: "Heart of Stone")

After detecting an omega molecule, Captain Kathryn Janeway and the crew of the USS Voyager were left with little option but to construct a harmonic resonance chamber to destroy the molecules. Pattern enhancers had been set up in the alien laboratory to ensure the transporter had a stable lock. (VOY: "The Omega Directive")

While attempting to steal a transwarp coil from a Borg sphere in 2375, a Voyager away team was able to cut through the Borg shielding with just a single pattern enhancer. (VOY: "Dark Frontier")

While hiding the telepathic Brenari and Voyager crew members that were telepathic from the Devore, the crew devised a method of using pattern enhancers to conceal the telepaths in transporter suspension without leaving a record the Devore inspection teams could find. (VOY: "Counterpoint")

While attempting to recover the Friendship 1 probe, Chakotay led an away team to an alien planet with an irradiated atmosphere. At a distance of less than three kilometers, radiation levels of six thousand isorems required the team to bring pattern enhancers to transport the probe. Before the team could set up, they were taken prisoner by Otrin and his people, who allowed Lieutenant Joe Carey to set up the enhancers before killing him as he was being beamed to Voyager. (VOY: "Friendship One")

In 2380, the crew of the USS Cerritos apparently made use of pattern enhancers during a second contact mission with the Galardonians. (LD: "Second Contact")

Transporter enhancers were first designed by Rick Sternbach in August 1991 for "Power Play". Early sketches featured a ground spike at the base, which would be replaced by a tripod for the episode.

The final prop, with case