The Enterprise, searching for a missing Federation historian, discovers that the historian has apparently contaminated the cultural development of the planet where he was assigned as a cultural observer to have it follow the societal path of Nazi Germany in the 1930s and '40s.

The USS Enterprise heads for the planet Ekos to locate a missing cultural observer, John Gill, a noted historian and brilliant history teacher who had been one of Kirk's instructors at Academy. Spock and McCoy reminisce about his style of approaching history as a matter of causes and motivations, rather than simply dates and events.

While approaching the planet, the Enterprise is attacked by an old-style chemical rocket with a thermonuclear warhead – technology of whose development the planet is not yet supposed to be capable. Kirk has Chekov destroy the rocket with the ship's phasers. McCoy notes that the missile is generations ahead from where they should be technically. Kirk surmises that they may have had help – and Spock glances at Gill's photo.

Fearing that Gill's mission has been compromised in violation of the Prime Directive of non-interference with developing planets, Kirk and Spock beam down to Ekos. Before they do, they have McCoy insert subcutaneous emergency transponders, dependent on crystalline rubindium, into their forearms, to locate them for retrieval in the event they cannot use their communicators. Kirk orders that Scotty beam them up at the appointed time if they fail to contact the ship, no matter what their condition may be.

Upon beaming down, Kirk and Spock find a culture almost identical to that of Germany during its Nazi period of the 1930s and 40s, right down to the uniforms, salutes, persecution of another ethnic culture – in this case the inhabitants of the neighboring planet Zeon, and the concept of the Führer – John Gill himself. Stealing some SS uniforms, Kirk and Spock attempt to infiltrate the Führer's headquarters but are quickly captured when Spock is forced to remove his helmet, revealing his pointed Vulcan ears.

Kirk and Spock are stripped to the waist and interrogated by an SS-Major, who lashes them cruelly with a whip; this, however, is interrupted by Chairman Eneg, who chides the SS guard for not realizing that punishment is effective for only just so long.

Left with their wounds still open, they find themselves imprisoned next to Isak, a Zeon underground member who explains how the Nazi movement began on Ekos, coinciding precisely with the time of Gill's arrival. Improvising a crude cutting-torch laser from the rubindium crystals from the transponders Kirk had had McCoy insert, at a subcutaneous level, into the skins of their forearms before beaming down, the trio then make their way to the SS laboratory, where Kirk pickpockets the keys from a guard; they manage to escape and retrieve two disassembled communicators from a SS laboratory. Kirk and Spock are able to steal SS uniforms again and leave, hauling out Isak in a stretcher. Later, the three return to the underground's base. There, Isak is greeted by his brother, Abrom, and told of the death of his fiancée, Uletta. In the midst of this, a squad of Ekosian stormtroopers (led by a woman) arrives, intent on arresting the entire lot. She apparently shoots Abrom dead and plans to "finish the job" by killing Kirk.

When Kirk and Spock intervene to help the underground workers, it is revealed that the woman, Daras (who they recognized from a propaganda broadcast they viewed earlier), is an Ekosian member of the underground and the storming was a test to see if the two strangers could be trusted – once Kirk and Spock responded to her apparent murder of Abrom by her holding at gunpoint, those gathered realized that the two strangers were definitely on their side and put an end to the ruse. Kirk and Spock then reveal who they really are and why they are there.

The next opportunity to get to the Führer, they decide, is an upcoming speech in the chancellery in which Isak suspects war will be declared on Zeon (the "Final Solution"). To infiltrate the chancellery, Kirk and Spock accompany Daras and Isak (in Nazi disguise) to Führer headquarters posing as a Nazi documentary crew to try and reach Gill. Kirk, Spock, Isak, and Daras walk down a corridor pretending to film a record of the Führer's final solution speech. During this, Spock catches a glimpse of John Gill in a guarded room, seemingly drugged. Kirk tells Spock that they need Dr. McCoy. Kirk hides inside a cloakroom with Spock and asks Lieutenant Uhura to have McCoy beamed down from the Enterprise, however, they learn from Daras that the transmission was traced, prompting a search party. The doctor joins them dressed in a Nazi colonel's uniform who complains the ship's computer got the measurements on his boot wrong. Before he could answer, two guards led by Chairman Eneg barge into the cloakroom.

With seconds to think, Kirk quickly says that the colonel is drunk and his presence in a drunken state would embarrass the Führer. Eneg accepts their explanation and explains they're conducting a search and leaves, leaving Spock puzzled why Eneg didn't recognize the two of them. With McCoy now joined with them, the group listens to a speech by Gill, followed by another from his deputy, Melakon, pledging the destruction of Zeon which is already taking place as he speaks. Meanwhile, the three are able to sneak into a broadcast booth and find Gill, heavily drugged. McCoy is able to partially revive Gill with stimulants, but Spock must use his mind probe talents to attempt to make Gill able to communicate.

Meanwhile, they overhear Melakon announce the commencement of the Final Decision, the genocidal invasion of Zeon. Daras pleads with Kirk to have the Enterprise intercept and destroy the invasion fleet as a last resort. Kirk is unwilling considering that would mean the deaths of thousands of Ekosians, as well as numerous underground Zeons who have infiltrated the Ekosian forces to attempt to interfere with their operations. Daras rationalizes that would be the lesser evil than to permit the murder of millions on Zeon, but Kirk is determined to help both populations who are equally victims of Gill's interference.

Eventually, Spock is able to establish contact with Gill and they learn the truth; Gill had taken matters into his own hands on Ekos, which he had found to be in a condition of anarchy. He tried to help by encouraging the Ekosians to adopt Nazi Germany as a model, believing they could embrace its efficiency while eschewing its sadistic or xenophobic aspects. Kirk is appalled by Gill's naivete, but Spock points out that the Nazis' phenomenal recovery from Germany's economic and political collapse following World War I might make it a compelling example even for a gentle man such as Gill. Unfortunately, Melakon saw an opportunity and drugged Gill, installing him as a figurehead leader and orchestrating the Ekosians' slide into violent militarism and racial hatred.

The search party, led by Eneg, steps into the room, and Kirk quickly pretends they foiled an assassination attempt by Spock. They convince Eneg to present him to Melakon, which also convinces Isak that he is a member of the underground resistance. While they distract Melakon, Kirk struggles to revive Gill to a sufficiently coherent state. Gill is finally able to broadcast a message halting the invasion and declaring Melakon a traitor. Melakon takes an MP40 machine gun from a guard and shoots Gill through the broadcast booth curtain to silence him. Isak, in turn, shoots Melakon twice with a Luger, killing him instantly. As Gill dies in Kirk's arms, he tells the captain that the Prime Directive was the right way all along. Meanwhile, Eneg takes control of the government, declaring, "There has been enough killing. Now we'll start to live the way the Führer meant us to live." He plans to go on the airwaves with Daras to offer a new way of life for both Ekosians and Zeons.

Back on board the Enterprise, Spock expresses confusion as to how a man as logical as Gill could make such a mistake as emulating the Nazis. Kirk says the problem was not simply the Nazis themselves but giving any one individual so much power. McCoy remarks how power corrupts and absolute power corrupts absolutely; Spock dryly points out several examples from Earth history of just that mentality and Kirk cuts off their argument by saying, "Gentlemen, we've just been through one civil war; let's not start another." Kirk then orders Ensign Chekov to plot a course and break out of orbit around Ekos as quickly as possible.

- Ekosian Newscaster and Kirk, on the missile attack on the Enterprise

"You should make a very convincing Nazi."

"Lieutenant? Better see a doctor. You don't look well. Your color."
"Yes. I shall tend to it, Major."
"Lieutenant! Your helmet. Remove it!"

"I…don't care if you hit the broad side of a barn. Just hurry, please."
"Captain, why should I aim at such a structure?"
"Never mind, Spock. Just…get on with the job."

- Kirk and Spock, before breaking out of their jail cell

"If we adopt the ways of the Nazis, we're as bad as the Nazis."

- Isak, after learning of Uletta's death

"Captain, I'm beginning to understand why you earth men enjoy gambling. No matter how carefully one computes the odds of success, there is still a certain… exhilaration in the risk."
"Very good, Spock. We may make a Human of you yet."
"I hope not."

- Spock and Kirk, on the Human thrill of risk-taking

"Doctor McCoy is having difficulty with that uniform, sir."
"Send him down naked if you have to! Kirk out."

- Uhura and Kirk, before McCoy beams into the cloakroom

"Planet... fragmented... divided. Took lesson from... Earth history."
"But why Nazi Germany? You studied history; you knew what the Nazis were!"
"Most efficient state....Earth ever knew..."

- John Gill and Kirk, on why Gill violated the Prime Directive

"Note the sinister eyes and the malformed ears. Definitely an inferior race."

- Melakon to Daras, on Spock

- Isak and Kirk, after Gill's death

"It is time to stop the bloodshed…to bury our dead."

- Eneg, as the war between Ekos and Zeon (apparently) ends

"Gentlemen, we've just been through one civil war; let's not start another."

The remastered version of "Patterns of Force" aired in many North American markets during the weekend of 19 May 2007. While the episode required very few new effects, an entirely new shot of the Enterprise phasering the Ekosian warhead was substituted. In addition, Ekos was given a CGI-makeover as a more Earth-like planet, with new orbital shots of the Enterprise, and the rubindium crystal beam was refined. 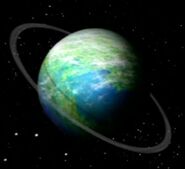 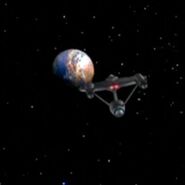 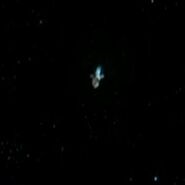