Multiple characters
Patricia "Patti" Begley is an actress who worked for seven years on Star Trek: Deep Space Nine. As a background performer Begley received no credit for her appearances. A costume worn by Begley portraying a Bajoran command officer was sold off on the It's A Wrap! sale and auction on eBay. [1] Begley was also one of the main stand-ins on the series, standing in for Ferengi performers as well as for Nicole de Boer. 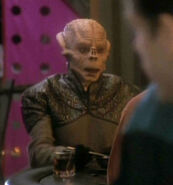 Kobheerian
DS9: "Improbable Cause"
(uncredited)
Add an image to this gallery

Retrieved from "https://memory-alpha.fandom.com/wiki/Patti_Begley?oldid=2701418"
Community content is available under CC-BY-NC unless otherwise noted.